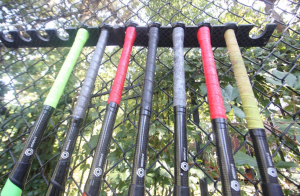 That data, combined with our 2016 and 2015 reviews of the DeMarini Overlord and our extensive knowledge of baseball bat performance, works into the following 2017 DeMarini Voodoo Insane Review.


We have a week’s worth of cage hitting with the 2017 DeMarini Voodoo Insane. We’ve also exchanged emails with DeMarini discussing the upgrades and performance of this new bat. The bat is an endloaded hybrid with a great feel, big barrel, and top-end performance. This is made for good to big-sized hitters and is reminiscent of the new The Goods that people pay twice the price for.

This 2017 Voodoo Insane is considered the real next generation of the Voodoo we’ve come to know and love. On the whole, the endloaded Voodoo from DeMarini is built for advanced and strong players with great mechanics who most often hit for power.

The most obvious comparable bat to the DeMarini Voodoo Insane is the 2016 Easton Hybrid XL. Both are endloaded two piece hybrid bats with oversized barrels, top shelf pricing and legit performance.

There are other two piece hybrid bats in the market, but none with a real focus on the end load like the DeMarini Voodoo Insane.

The 2017 Voodoo Insane and 2016 Voodoo Raw have much in common. Both are end loaded two piece hybrid bats built for the elite player. Both barrels, at least for the hybird space, are legit and perform well at all pitch speeds. Each bat has the ability for customization through DeMarini’s custom site. Both have tapered knobs.

If there is any difference, besides the obvious colorway change, DeMarini claims the alloy material has been upgraded from the 2016 Raw. This upgrade gives DeMarini more latitude on swing weight placement. However, since the Voodoo Insane is already endloaded, the upgraded alloy doesn’t effect the Voodoo Insane. Instead, the noticeable upgrade in the Voodoo alloy will be found on the 2017 Voodoo Balance.