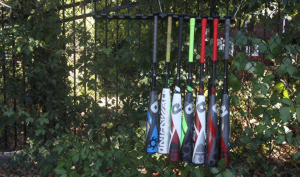 Our hitters love the big barrel and hot out of the wrapper performance of the Voodoo Balanced for 2017. Although many have come before and since we think the 2017 version holds up to anything you can find on the market today for 3 or 4x times the price.


We hit with the 2017 DeMarini Voodoo Balanced in both BBCOR and big barrel sizing and gathered feedback from several different hitters. We also spent considerable time reviewing previous versions of the Voodoo and NVS Vexxum, which are, we argue, predecessors to the DeMarini Voodoo Balanced. Added to our extensive knowledge of performance baseball bats and the several hundred reviews we’ve written on this site collectively, this 2017 Voodoo DeMarini Voodoo Balanced review comes on the heels of thousands of hours of research and testing.

Instead, we like to think of the Voodoo Balance as the next generation of the 2016 DeMarini NVS Vexxum. The Vexxum is a two-piece hybrid with a more balanced swing than the Voodoo Raw. The Vexxum, however, was always a step or two behind the Voodoo technology in terms of barrel size, alloy and handle composition. As such, the Balance has considerable upgrades to the handle and alloy barrel if compared directly to the 2016 Vexxum. Both upgraded features contribute to a much longer and more usable barrel.

A light swinging two piece hybrid bat in the performance space is a small category of bats. However, there is some legit competition if you find yourself in this exact market. Easton would claim, and so would we, the 2017 Z-Core Hybrid is a comparable bat in terms of barrel size, swing weight and composition. The Z-Core’s barrel is a bit larger than the Voodoo Balance. On the other hand, you simply can’t overlook the successful pedigree of the Voodoo line.

Another comparable bat is the 2016 Louisville Slugger 716 Select. This two piece hybrid is also a light swinging bat with a well performing barrel used at all levels of the sport. Those who like hot out of the wrapper performance in the collegiate ranks gravitate to this bat. From what we have gathered, the 716 will not be produced in a 2017 model. We can only guess, but the acquisition of  Slugger by Wilson, who also owns DeMarini, might have something to do with a Voodoo Balance release and the lack of a 2017 717 from Louisville Slugger.