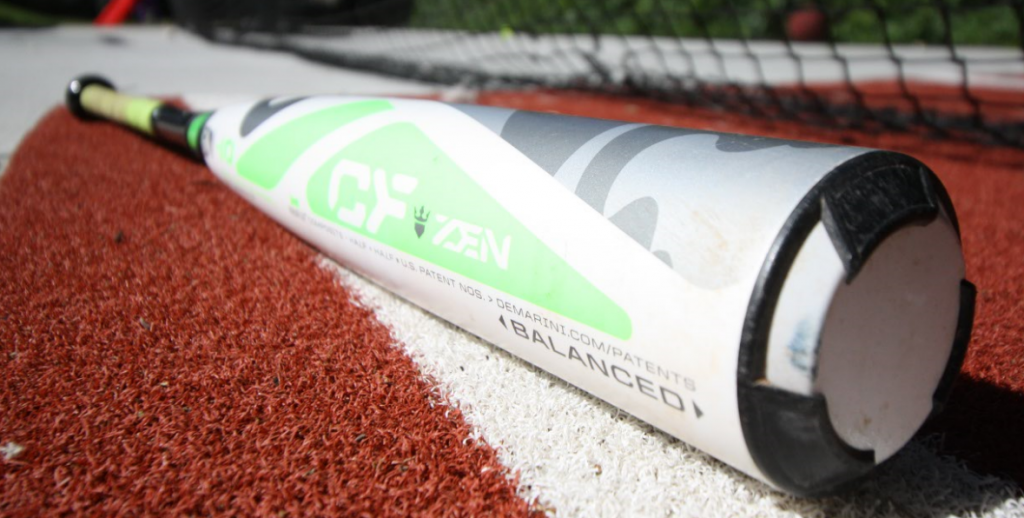 The 2017 CF Zen is a legend. The 2 3/4 blue one was banned from USSSA play and the 2 5/8 green drop 5 was and is an absolute ball killer. At the time of this updated writing you can still find it on Amazon in exchange for your kidney. The bat is the perfect blend of balance and performance. Long sweet spot in every size and dominates the USSSA space. The only downfall is that it has some durability issues—but that is directly correlated to how hot the bat is from day 1.

Many players who also used the 2016 CF8, felt the Zen was stronger at contact and had more of a shallow ping sound. They liked the balance and couldn’t differentiate its swing weight with a similarly sized CF8. The grip, they often mentioned, felt more slimR… Jump to the full review.

Many players who also used the 2016 CF8, felt the Zen was stronger at contact and had more of a shallow ping sound. They liked the balance and couldn’t differentiate its swing weight with a similarly sized CF8. The grip, they often mentioned, felt more slim—although we think they were deceived by their aftermarket 1.8mm Lizard Skin. A few mentioned they would have liked a tapered grip on the smaller bats like it is on the BBCOR. All in all, results came highly recommended and coveted. We are sure the 2017 CF Zen will have at least as much success at the plate than the previous years’ CF predecessors.

The buttery power of the CF series of bats will ring honest and true. The Zen is lightly balanced with outstanding pop at any pitch speed when hit correctly.

Note: Since this review was first published two of the CF Zens have been deemed illegal for play in the USSSA world. They include the 2 5/8 Drop 8 and the 2 3/4 Drop 10. You can read more about those CF Zen Illegal details, as well as options, here.

We have yet to find anyone who has seriously used a 2017 CF Zen series of bats and didn’t walk away impressed. At the BBCOR level we’ve never heard a complaint on durability. They swing light, have big barrels and they hit the ball well. Serious players, almost across the board, are very happy with their BBCOR 2017 CF Zens. If you prefer a balanced swing a two piece composite then this might be the BBCOR bat for you.

The Senior League and Big Barrel bats of DeMarini’s CF Zen line dominate the space. The 2017 version, in some sense, started it all. The 2 3/4 blue version were also the ones that became illegal and needed to be retooled. Notice the orange cap on the end? That means the bat has been reinforced by the manufacturers, given a new serial number, and is now legal for play. The bats without the orange cap are absolute bomb droppers. And, turns out, illegal. The bat had its fair share of breaking too, but that doesn’t keep it from raking. The drop 5 is a monster.

The most promising construction upgrade from the 2016 CF8 to the 2017 CF Zen is the new and stronger carbon fiber. Carbon fiber (i.e. plastic) can be easily manipulated. A stronger construction isn’t an unreasonable claim to make and we have no reason to think DeMarini is embellishing the claim (which is, specifically, 22% stronger by their calculations). The stronger CF allows for less material (read: weight) to be used up in barrel and handle construction. That weight freedom, if you will, allows for more focus on the knob and end cap to deliver optimal balance and component structural improvements.

In fact, it is this precise upgrade (which DeMarini is calling a new Paraflex composite) from the CF8 to the 2017 CF series of bats that allows for the creation of the CF Insane (the sweet spirited, heavier sister of the CF Zen).

The CF Zen uses the Paraflex composite, creating its ultra light swing weight by more optimally weighting the end cap and knob. Its ultimate swing weight measurements (by our calculations) have not changed from the 2016 CF8 or 2015 CF7.

The forefather of modern-day two-piece bats is the CF7. We liked the CF5, but the CF7 is another level. It is the precursor to the CFs of the 2020s and not much has changed. If you can find one of these bats on a secondary market we'd say get it.

There isn’t a bat company in existence that hasn’t tried to mimic the DeMarini CF series of bats in some fashion or another. This makes a list of comparable bats, at least as other manufacturers would see it, long. There are a few we think worth highlighting, if you are, in fact, in the top shelf bat market in terms of performance and price. For the 2017 class we like the Easton MAKO, Rawlings Quatro and Slugger 917 Prime. All our two piece composites with a generally light swing. They are very comparable to the CF Zen in construction and price.

After considerable time in the cage, direct feedback from hitters at different levels of the sport and discussions about the upgrades with several in the know, we present our 2017 Rawlings Quatro bat review in both Senior League and BBCOR.

We have spent a lot of time over the last several weeks getting ready for this review.

After 2 solid hours in the cage with Slugger’s 2017 917 Prime in tow we have a good grasp on its total performance, how it compares to it’s predecessor and what type of hitter will appreciate this bat the most.

DeMarini claims to have a proprietary process which delivers both the power of the swing and the benefit of no reverberation in the hands on mishits. The claim is the D-Fusion 2.0 handle (which you can find on the CF8 as well) uses a type of dampener in the mend which stops the vibration to the hands, but is still stiff enough to deliver maximum power to the ball.

We can attest, after years of experience and probably over 2000 hours obsessed with the CF6, CF7, CF8 and now Zen, that DeMarini’s transitional mend on their two piece composite bat is as good as it gets in the industry. In fact, we’d rank them equal to, if not better than, the Easton MAKO franchise in terms of smoothness on contact. We’ve yet to hit with any two piece composite bat that feels better than the DeMarini.

There is another suspect claim which we’ve often heard when discussing DeMarini’s mending process with vendors and players. It is, in addition to the mend keeping vibration from the handle, the proprietary mend also redelivers the energy of the mishit back to the point of contact—much like an echo—and ultimately increases power deliver to the ball. We doubt this, not because we’ve proven it wrong in a lab, but rather because we think the idea that such an echo could occur in the milliseconds in which the ball is actually in contact with the bat to be far fetched and, at best, marketing spin. Show us a mishit that has the same batted ball speed as a sweet spot hit given all other things equal, and then we can talk.

The CF Zen is a two piece carbon fiber composite bat. Those familiar with previous years’ CF8 and CF7 will understand this well enough. Two piece composite bats have defined the performance space across the board over the last several years and there is no doubt DeMarini’s CF line of bats have often led that charge.

Two piece carbon fiber (i.e. plastic) bats are formed by creating both a barrel and handle of a bat separately. Then the two pieces are mended together. The trick manufacturers struggle with is finding the optimal stiffness within that mend. On one hand you need a stiff transition to transfer all the power to the ball, but on the other hand, an ultra stiff transition transfers too much sting on mishits to the hand—removing that ‘oh-so-buttery’ feel most hitters love (and often hate) about two piece composite bats.