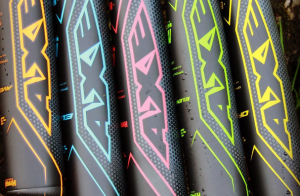 With one glaring exception, the 2017 Axe Elite is built just like the 2016 version. That is the asymmetric knob with its EndoGrid knob and a two-piece hybrid design. Hybrid bats, as you know, are produced with a composite handle and an aluminum barrel. This approach gives hot out-of-the-wrapper performance of a metal barrel with the smoother feel of a composite handle and two-piece connection.

The one glaring exception, and a serious upgrade to the 2017 version, is the addition of an asymmetric end cap on this year’s Elite. This shaped end cap, which we discuss at length in another article, noticeably moves the balance point of the bat toward the hands, thus decreasing the mass moment of inertia.


For three years we have hit extensively with an asymmetric knob on an Axe Bat. Now, for almost a year, we have spent time with a bat with an asymmetric end cap. Like the 2017 Axe ELITE, sometimes those features come on a 2 5/8 hybrid bat, where the handle is composite and the barrel is aluminum. This research and testing allow us to recommend the AXE Elite for a select group of hitters—in particular, those looking for a balanced swing in a hybrid bat, who are comfortable with a more focused barrel and can appreciate the asymmetric knob.

We Would If Our Hitter Wanted

We Would Not If Our Hitter Wanted

eBay
With one glaring exception, the 2017 Axe Elite is built just like the 2016 version. That is, the asymmetric knob with its EndoGrid knob and a two-piece hybrid design. Hybrid bats, as you know, are produced with a composite handle and an aluminum barrel. This approach gives the hot out-of-the-wrapper performance of a metal barrel with the smoother feel of a composite handle and two-piece connection.
Sizing: 28, 29, 30, 31, 32-inch
Release Date:
Serial: 2017AXEELITEBB
Bat Type: Single Piece Alloy
Barrel Size: 2 5/8

In terms of a two-piece hybrid bat with an asymmetric end cap and knob, there simply isn’t anything like it. In that regard, the 2017 Axe Elite stands alone as a one of kind bat. Or course, the 2016 version is almost there save the end cap and lower swing weight.

There are, as well, several two-piece hybrid bats with a focus on low swing weight. The Covert from Mizuno and the Voodoo from DeMarini are the first that come to mind. Both, like the AXE Elite, are in the performance space. But to say those bats are akin to the 2017 Axe Elite is a stretch.