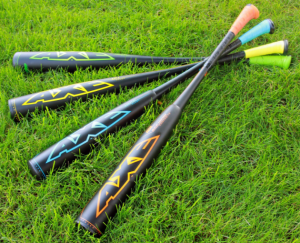 
In what stands to be confusing, the 2017 Axe Element looks almost exactly like the 2016 Axe Element Hyperwhip. Both are green and black and have an asymmetric end cap. Those two bats are quite a bit different, as the Hyperwhip has an elongated composite end cap for ultra-light swing weight. Do not confuse the two or you will experience vastly different bats. Our 2017 Axe Hyperwhip review is found here.  The 2017 Hyperwhip Fusion is red and pictured above.

The 2017 Axe Element may serve a few in the batting practice market, too. It runs a bit heavy in terms of swing weight and is ultra-durable. The asymmetric knob caters to the player who takes a lot of hacks, and in the long run, will feel better on your hands.

Our experience with the bat showed a decent-sized sweet spot.

eBay
The Element, on the whole, is the entry level bat for the Axe lineup. You can expect a stiff feel and a moderately balanced swing weight. The new asymmetric endcap to the already asymmetric knob make it a unique choice. We would recommend this for hitters who want the stiff feel of a one piece, the hot out of the wrapper performance of an aluminum and are willing to give an asymmetric knob a whirl.
Sizing: 31, 32, 33, 34-inch
Release Date:
Serial: AXEELEMENT2016
Bat Type: Single Piece Alloy
Barrel Size: 2 5/8
See other BBCOR Bats

eBay
The only person we would really recommend the 2017 Axe Element for is the person looking for a stiff single-piece alloy bat with a moderate swing weight that also doesn't want to afford the Axe Hyperwhip Fusion. We suspect that group of people to be rather small. The Fusion, at least by today's pricing, appears to cost about $100 more. It has the same barrel size, same 'asymmetricness' but an added composite end cap to help increase bat speed.
Sizing: 28, 29, 30, 31, 32-inch
Release Date:
Serial: AXEELEUSSSA2016US
Bat Type: Single Piece Alloy
Barrel Size: 2 5/8
See other Drop 10 USSSA Bats

In terms of a single-piece aluminum alloy bat with a moderate to lighter swing weight, your options might as well be endless in the BBCOR, Big Barrel, and Youth Barrel spaces. Bats like Slugger’s 517 Omaha and the Warstic are just a few.

But, in terms of an asymmetric handle and end cap found on a single-piece aluminum bat, your options are next to zero. The only comparable bat would be the 2016 or 2017 Hyperwhip Fusion from Axe, but as we state above, that bat has an extended composite end cap to lower swing weight.

The 2017 Axe Element is a single-piece bat made of aluminum. Axe claims to use a very strong aluminum alloy, and we have no reason to doubt them. Durability concerns from users are non-existent. This is the same as the 2016 version.