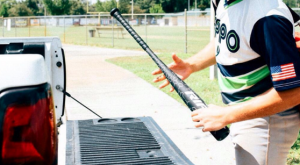 If you are a line drive or base hit player looking for a bat without a break-in period and an average to below swing weight then the 2016 RIP-IT Element Two is as good a choice as we could recommend. The bat does have a flared knob (which some prefer), only comes in a BBCOR, and isn’t too dramatic a  change from the 2015 Air Elite—but if those things don’t keep you from pulling the trigger then we think nothing should stop you.


The 2016 RIP-IT Element Two bat comes in only a BBCOR version. This two-piece hybrid BBCOR (drop 3) is a bat made for hitters —with a balanced swing weight and an average-sized barrel. After hours in the cage, reading reviews we trust online, and speaking with RIP-IT directly, we’d recommend the Element Two for average to smaller hitters who prefer a no-frills bat, in RIP-IT fashion, for the traditional 1 through 3 hole hitter in all of us.

We spent several hours in the cage with the 2016 Element Two BBCOR bat. We found that hitters with better mechanics tended to prefer the Element Two more than others—although no one walked away from the experience disliking the bat. The composite handle and flared grip felt smooth on impact. The barrel, although somewhat undersized compared to some composite performance bats, felt strong with consistent performance along its entire length.

Most hybrid bats (composite handle and aluminum barrel) in the BBCOR space tend towards an end-loaded design (see, for example, the DeMarini Voodoo Raw or 716 Select from Slugger). However, the RIP-IT Element Two keeps its balanced swing weight despite the heavier alloy found in the barrel. The Element Two is clearly hot right out of the wrapper and, when hit right, drilled baseballs on the back of the net.

Overall we got exactly what we expected from the BBCOR 2016 Element Two: A balanced swinging hybrid that performs exactly like a traditional feeling baseball bat right in RIP-IT fashion. The balanced hybrid is clearly designed for the one to three-hole hitters looking for line drive base hits.

eBay
If you are a line drive or base hit player looking for a bat without a break-in period and an average to below swing weight then the 2016 RIP-IT Element Two is as good a choice as we could recommend. The bat does have a flared knob (which some prefer), only comes in a BBCOR, and isn't too dramatic a  change from the 2015 Air Elite---but if those things don't keep you from pulling the trigger then we think nothing should stop you.
Sizing: 31, 32, 33, 34-inch
Release Date: January 1, 2016
Serial: BAC32
Bat Type: Hybrid
Barrel Size: 2 5/8
See other BBCOR Bats

There are not many two-piece balanced swinging hybrids in the BBCOR space for 2016. The first that comes to mind is the 2016 Rawlings TRIO. Some may argue Easton’s 2016 Z-Core Hybrid also fits the bill (although a bit heavier swing than the RIP-IT Element Two for sure).

Other than those two, the line-drive hitter looking for hot out-of-the-wrapper performance (i.e. aluminum barrel) with a bat built to reduce hand sting should find the RIP-IT Element Two a helpful tool in their 2016 gear bag.

There was no official RIP-IT Element Two in the 2015 RIP-IT lineup. There was, however, a balanced swinging hybrid bat in the BBCOR space by RIP-IT called the Air Elite. Compared to that 2015 Air Elite, RIP-IT claims the Element Two has an upgraded alloy in the barrel to increase durability and an upgraded composite in the handle to even further lower the swing weight. We can’t quite measure durability without a few good seasons of use, but the Element Two definitely swings lighter than the Air Elite.

We wouldn’t expect a reputable and longstanding company to hoodwink us on those upgrades from the Air Elite and are familiar enough with the brand and their history of quality to gear to accept their claims. If those claimed upgrades are worth the price difference of a new 2016 Element Two or the 2015 Air elite will be the reader’s call.

The 2016 RIP-IT Element Two is a two-piece hybrid bat with a balanced swing weight. They are designed like the 2015 RIP-IT Air Elite with a different color design and a lighter swing weight due to its even more lightweight composite handle. (RIP-IT refers to this as R4 Composite). RIP-IT also claims a new alloy in the barrel, called R4 Alloy, designed for better durability. Such durability claims would be nearly impossible to confirm other than taking their word for it—and we trust the brand enough to do so. It comes with a 400-day warranty and a 30-day love it or returns the policy, which is lovely.

The barrel size is what competitive sales reps claim the RIP-IT Element Two lacks. From a pure measurement standpoint, it’s hard to disagree. But RIP-IT bats have always been committed to making a baseball that looks and feels like a baseball bat—not a boat oar.