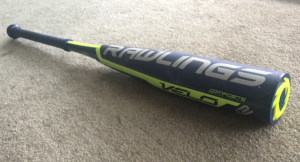 The 30/18 has a respectable size barrel and the added weight in the hands increased his contact percentage remarkably when compared to similarly-sized, yet end-loaded bats like the 2016 Voodoo Raw.

The VELO clearly lacks some jaw-dropping power that can be found in other sticks (like the Rawlings 5150) but for many hitters the name of the game is getting the ball in play, not sending it out of play.

The VELO’s success has come from lowering the swing weight and increasing the barrel size of an average bat. These features can dramatically increase contact percentage. As such, hitters looking for as much bat speed as possible should be considering the VELO.

On the flip side, it should be noted, the VELO’s lack of swing weight is also the reason the bat lacks some gumption at impact. The lack of jaw dropping power doesn’t mean the 2016 Rawlings VELO isn’t recommendable. On the contrary, for a hitter who needs more bat speed and bat control, the one piece VELO could be the perfect choice.

The 2016 VELO single piece baseball bat is found in the BBCOR, 2 5/8 Senior Barrel and the 2 1/4 youth barreled bat. This bat, like the 2015 version, is a remarkably light swinging bat with a hand loaded weight distribution. The light swing is created by a composite end cap that extends itself to well into the barrel of the bat (about 3 inches). This extended composite end cap also allows for a larger barrel when compared to other single piece alloy designs (like the Rawlings 5150 (Amazon $155)).

The two piece composite release in the 2 3/4 line will be an interesting experiment by way of seeing how much market share Rawlings can take from some other very serious players in that space.