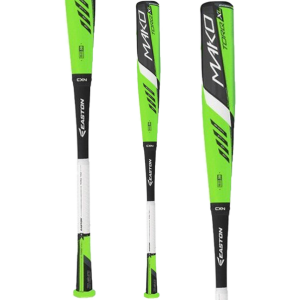 In terms of pure performance, the 2016 Easton MAKO XL TORQ is a top-shelf premium bat—no doubt about it. The barrel size is gigantic by any standards and the bat is a true end load. If a player is willing to become accustomed to the spinning handle—or is so already—and needs (or really wants) an end-loaded performance bat then the Easton MAKO TORQ should be on top of the list. If they can forgo the rotating handle we think there are better options.


We’ve spent over 10 hours in the cage collectively with the MAKO TORQ brand of bats—including the BBCOR, Little League (youth), and Big Barrel versions of the XL version. We’ve also seen the rotating handled bat at the plate at least one hundred times and have spoken to nearly anyone we’ve seen who uses the bat, about their experience. Additionally, we’ve spent time on the phone with Easton employees discussing the intricacies of the MAKO TORQ.

As such, we’d recommend the 2016 MAKO XL TORQ to those who are sure they love the traditional Easton XL1 (or the 2015 Easton MAKO XL) as an end-loaded two-piece composite and also believe they’d benefit from the larger MAKO barrel and the rotating handle’s potential for better inside plate coverage. If that isn’t you then we believe there are plenty of performance bats in this price range which will suit your fancy.

Outside the Easton brand, there are, obviously, no bats that have a rotating handle. In terms of messing with the shape or function of the handle only the Axe Bat line, from Baden Sports, can claim a similar intent with their asymmetric handle.

To get an end load outside the Easton brand you need to go with a hybrid bat like the DeMarini Voodoo Raw or Slugger’s 716 Select.

Otherwise, if you want a 2016 bat with a rotating handle that is both end loaded and a two-piece composite then your only option is the 2016 Easton MAKO XL TORQ.

The 2016 MAKO TORQs do have a new grip (TORQ TAQ). We found it to be a bit sticker than last years.

The 2016 Easton MAKO XL TORQ is a two piece composite bat built on the chassis of the very famous Easton MAKO—whch has been around since 2014. The XL version of the MAKO is an end loaded version akin to the Easton XL1 of days gone by (and the Easton MAKO XL of 2015).

The TORQ’s defining feature is the bottom four inches of the handle which spins freely around the handle. This rotating feature lends to its name: TORQ.

Easton uses the same connective technology (CXN) in their MAKO XL TORQ as they do in their other performance two piece bats. CXN is a marketing term for the welding technology that connects the barrel of the bat with the handle of the bat. In the baseball space, it is a rather stiff transition and what most hitters prefer. Easton has been using this design since the XL1 and S1 from 2012.

The barrel of the 2016 Easton XL TORQ, made from Easton’s THT Thermo Composite, is built to be gigantic and is akin to the barrel size on any of the MAKO barrels.  The handle of the bat is also constructed from Easton’s composite THT composite.

The MAKO XL TORQ is meant to be a heavy swinging bat in the performance space with a two-piece composite design built for big hitters.