Easton’s 2016 Hybrid Z-Core from Easton is a heavier swinging two piece hybrid bat (composite handle and aluminum barrel). Our review consists of hitting it in the cage and on the field with a few different hitters.

The 2016 Easton Z-Core Hybrid XL (Price Check*) is made for players who prefer a big barreled and heavy swinging aluminum barrel bat that eliminates hand sting through a composite handle.

With the Easton MAKO and MAKO Torq getting all the publicity these days, I think the industry might be missing an impressive addition to Easton's now gigantic Power Brigade line. The Easton S2z is a new concept bat from Easton that incorporates a few industry tricks and the shell of the new Easton S2.

DeMarini’s Voodoo Raw and Louisville Slugger’s 716 Select Select both stand out as comparable bats to the 2016 Easton Hybrid XL. All three bats are two-piece hybrid bats with heavier swing weights. They also tend to be built for the heavy hitter and the collegiate player who prefers a bat with no break-in period on the barrel.

The three bats aren’t exactly the same, however. Easton boasts a larger barrel size than the other two while the Voodoo boasts a serious amount of technology in the connective piece to transfer max energy to the ball. The 716 comes in slightly lighter swing weight than either.

In the end, it’s hard to say you’d go wrong with either of those choices. We prefer the Voodoo on what may simply be an “institutional knowledge bias”. Meaning, we simply have had a ton of experience with the Voodoo bat and this new iteration of Easton is, well, new. As well, the Hybrid XL only comes in a BBCOR version while the Voodoo and the 716 come in all types of sizes and models. That fact alone eliminates a significant amount of players.

We spent 2 hours in the cage and 1 hour in the field hitting with the 2016 Louisville Slugger 716 Select. We also spent another 2 hours reading reviews from other players and deciphering message boards that discuss this bat. In that 5 hour time, we found the 716 Select to be a lighter swinging hybrid bat built hot out of the wrapper for players who consider themselves occasional power hitters and, due to it’s focused barrel, know how to hit a ball well.

We have a week’s worth of cage hitting with the 2017 DeMarini Voodoo Insane. We’ve also exchanged emails with DeMarini discussing the upgrades and performance of this new bat. The bat is an endloaded hybrid with a great feel, big barrel, and top-end performance. This is made for good to big-sized hitters and is reminiscent of the new The Goods that people pay twice the price for.

The 2016 Easton Z-Core Hybrid XL bat is a two-piece baseball bat built with a composite handle and aluminum barrel. It is identical to the 2016 Easton Z-Core Hybrid (no XL) but with a heavier swing weight. The aluminum barrel, like the Z-Core bats from 2015 (S2z and S3z) has a composite sleeve inside which gives it the strength and durably to be severely oversized. This is a good thing.

Like the 2015 Easton S2z and S3z, the Easton Z-Core Hybrid XL will use a spiraled carbon fiber handle design to decrease sting on mishits and add to a buttery soft swing and ping. We are not sure if this actually works, but we do find the two-piece design on most bats does indeed remove hand sting.

The bat will not be available in a Big Barrel, Youth Barrel or T-ball sizes. Those looking for a hybrid bat from Easton in those barrel sizes will need to look at the 2016 Easton S2. 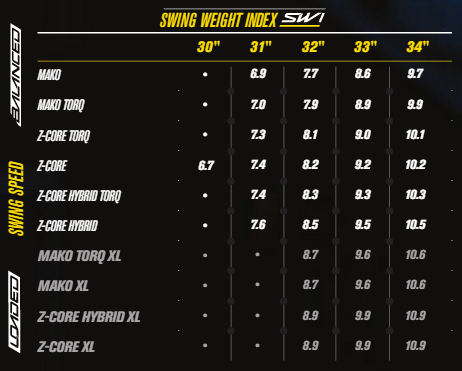