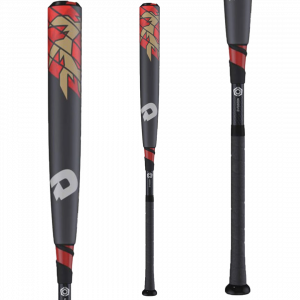 For several years DeMarini has created a beast of a bat in the Voodoo line, and many expect DeMarini to do it again this year. Hence the excitement for a wildly popular model that, year in and year out, has lived up to high expectations (if not outpaced them).

The BBCOR version will likely be the most popular of the Voodoo Raw bats. Like the 2015 Overlord FT last year, the 2016 Voodoo Raw showed head-spinning power and top-notch performance in the cage. With this bat, it takes just a matter of minutes to realize why players at all levels love the Voodoo. The 2016 BBCOR Raw pings perfectly on impact, feels flawless on contact, and hits homers you can’t bring back.

Amazon eBay JustBats
The DeMarini Voodoo Raw is a two piece hybrid bat with a bit of an endload and a softer connection piece. The bat hits the ball great and is made for that big hitter who doesn't like hand sting.
Sizing: 31, 32, 33, 34-inch
Release Date: September 1, 2015
Serial: DXVDC
Bat Type: Hybrid
Barrel Size: 2 5/8
See other BBCOR Bats

There are some differences from 2015 Overlord FT worth mentioning:

The 2 1/4 youth line of bats from DeMarini’s hybrid line will include, again, a drop 13 Voodoo. Of particular note, the 2016 youth barreled Voodoo Raw, unlike all the other Raws this year, has a light swing weight (MOI). That fact, coupled with its massive size range of 28 inches up to 32 inches, makes it the most versatile Voodoo Raw in the entire 2016 lineup.

One fear we always take into the cage with a drop 13 is how easily hand sting can affect batter confidence—skinny, and light bats tend to wring your hands like the dickens on mishits. The last thing a young player needs is the fear of getting electrocuted every-time he attacks a baseball. But DeMarini’s two-piece technology in the Voodoo has come as close as anything to solving that issue in the light swinging bats. Overall

When reviewing baseball bats, it’s hard to think of negative things when there isn’t anything negative to say. The Voodoo is to the high-performance hybrid bat arena what the Rolls Royce is to the luxury car market in that it defines the space. It was the first (that stuck), it dominates the hybrid bat market, and it is the standard to which all other hybrid bats are compared. From T-Ball to Travel Ball to the NCAA World Series in Omaha, the 2016 Raw will serve as yet another loved iteration in a long genealogy of Voodoo bats that flat out rake.