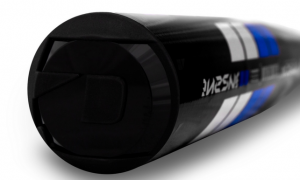 The 2016 DeMarini Insane Review should sound a whole lot like the 2015 DeMarini Insane Review. Why? Well, mostly because the bat’s only change from 2015 is the addition of color ups. The bat will continue to sport DeMarini’s traditional alloy and an end-loaded once piece design made for serious hitters who can appreciate the purpose of hand sting.

The BBCOR, Senior League, Big Barrel and Youth Barrel Insane all feel very stiff at contact and unforgiving on mishits. When hit right, and it does take some skill to do so, there is serious satisfaction in pure ball flight and distance. There aren’t very many bats we’ve swung that transfer more energy directly to the ball at impact like the Insane. A real stiff bat that can deliver real stiff drives and feels as much like a single billet wood bat as any metal bat on the market is what you’ll get in the 2016 Insane.

In the performance space, there are a few single piece aluminum bats. If you are looking for one that has an end load like the DeMarini Insane then the options indeed get slimmer. In the BBCOR space, folks looking for a similar bat in design and swing weight in the 2016 class should check out Easton’s Z-Core HMX XL bat or RIP-IT’s Element One.

In Senior League, Big Barrel, or Little League (youth barrel) than the 2016 Easton XL3 should do the trick. The Element One from RIP-IT does have youth and senior league versions but those bats are built with a more balanced swing in mind—unlike the Easton XL3 and DeMarini Insane which are made as a big-hitting bat in every 2016 iteration they make.

In relation to the 2015 version, there are no differences in the bat aside from the paint job color-ups. The Insane has the same upgraded end cap the 2015 version had from the 2014 version. It is made with the same SC4 DeMarini Aluminum Alloy as the 2015 and 2014 versions. The 2016 even comes in the same drops per league as previous years.

The Final Say, For Now

The Insane is a no-frills bat built and designed for exactly who they claim it is: The big hitter who likes feedback and prefers the added distance you can get from a one-piece stiff aluminum bat. Those who hit well with a DeMarini Insane tend to have a real angry swing that punishes balls when hit well and their hands when it’s not. It’s a bat that recreates the wood hitting experience as well as any metal or composite bat on the market. If such describes you then this bat should feel right at home. If even one of those things does not sound like you then we suggest you keep looking at our other bat reviews.

The 2016 DeMarini Insane is a single-piece aluminum alloy bat made stiff from knob to end cap for direct to ball power transfer. When hit right the bat is an absolute ball killer.

The bat, due to its aluminum construction, is hot out of the wrapper and does not require a break-in period. The color design of the 2016 Insane puts differentiating marks around the end of the barrel to allow you to manage the part of the barrel you make contact—but these should not be used to imply the bat requires a break-in period. The bat is never any hotter than right out of the wrapper.