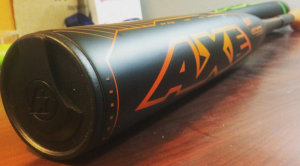 After evaluation, we are comfortable recommending the 2016 Axe Avenge bat to those who prefer two-piece composite bats, appreciate a bat with an asymmetric handle, and look for a top-shelf performance bat.

To date, we’ve hit with and reviewed a host of these unique bats, including the Element, Avenge Baseball, Avenge Fast Pitch, Avenge Softball, T-Ball, Elite, Fungo, and Maple Composite Bats.

No other bat on the market has an asymmetric handle unless Axe Bats makes it. The most similar bat to the 2016 Axe Avenge would be the 2015 Axe Avenge. The 2015, however, does not contain the new Endogrid knob for a dampened sting on mishits nor the directional support disc only made possible by a bat with one-sided hitting.

If you are willing to forgo the asymmetric handle and barrel built for one-sided hitting (which would be the reasons to get the Axe Avenge in the first place), then you’re back to square one. Another high-end two-piece composite bats in the 2016 space are the DeMarini CF8, Louisville Slugger’s 916 Prime, Adidas RBZ EQT, and the Easton MAKO. If you’d like something a bit more unique—like the Axe Avenge—then maybe take a look at the 2016 Easton MAKO Torq with its famed spinning handle.

The 2016 Axe Avenge bat is the top-shelf version built from a long line of bats from Axe Bats (owned by Baden Sports) and their noteworthy asymmetric handle. They patented the now-famous Axe handle several years ago and have never looked back—producing bats in the softball, fastpitch, baseball, and wood bat space. Just last year, and as a breakthrough in the American baseball psyche, the Axe handle was added to a Victus Bat and swung by, among others, Dustin Pedroia on a pretty consistent basis in the 2015 season. That verification of the technology put Axe bats on the map to stay—as if it wasn’t already.

Asymmetric Handle: We’ve discussed, at length, the benefits an asymmetric handle brings to your game. As a primer for some and a review for others, the asymmetric handle creates an ergonomic method for proper swing mechanics. Namely, the ability to drive the knob of the bat to the baseball more easily. Such movement is proven to increase swing speed and forces the barrel of the bat into the swing plane sooner—allowing for better hit balls and more opportunity for contact.

Asymmetric Handle (continued): An asymmetric handle also forces contact on a single side of the barrel. This allows engineers to drive technology to the hitting side of the barrel. For example, the 2016 Axe Avenge uses a directional insert (ACR Insert) within the bat to support the barrel’s contact side for more consistent performance and durability.