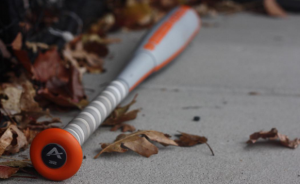 In particular, those looking for lighter swing weight, a decent-sized barrel, a two-piece bat that naturally dampens swing with a slightly tapered knob, and/or a performance aluminum alloy barrel hot out of the wrapper may very well find their weapon of choice in the 2016 Anderson Centerfire bat.

It’s with that backdrop the 2016 Centerfire from Anderson takes center stage. The bat addresses the hand sting issue with a two-piece design. The composite handle eliminates much of the hand sting the player may have found in a one-piece while the aluminum barrel (made from similar material found in the barrel of the Techzilla 2.0) still delivers the ball crushing power we’ve come to expect. Additionally, the bat is made in a drop 5 senior barrel.

Anderson, the company, revamped itself about 2 years ago and revitalized the show-stopping sizzle of a one-piece aluminum bat in the Techzilla 2.0 for 2015. Yet that Techzilla fell short in its size offerings by having no big barrel version. As well, its one-piece construction was enough of a hand ringer on mishits to keep more than a couple of players from using it consistently—and never on a colder day. (Although we should add, those who could use the 2015 bat quickly fell in love with it).

If a lighter swinging hybrid bat in the youth barrel or senior league (big barrel) space is in your wheelhouse, then there are several other bats, in addition to the 2016 Anderson Centerfire bat which you may consider. To name a few, Easton’s 2016 Z-Core Hybrid, Rawling’s 2016 Trio, and Combat’s Fray. There are several other hybrid bats in the performance space but they tend toward the heavier swing weight. Those would include the DeMarni Voodoo and the Louisville Slugger 716 Select.

To date, Anderson has produced only one-piece aluminum bats. Those bats, like the Techzilla, were famed far and wide for their stellar performance. In fact, many consider the original youth barrel Techzilla circa 2006 one of the best bats ever made. It was, and still is, one of our favorite bats and, although now illegal in a handful of leagues, can still be found on ebay with a search like this at a serious premium. A 2006 bat selling for above retail 9 years later is solid proof of the prowess of that beautiful bomb dropper.

The 2016 Anderson Centerfire is a traditional hybrid baseball bat design. Meaning, it comes with a composite handle merged onto an aluminum barrel. Those who prefer these hybrid bats appreciate the lighter swing when compared to a fully aluminum bat but still maintain the hot the out of wrapper taste of peak performance aluminum barrel. Compared to a fully composite bat, you can generally expect hybrid bats to have a heavier swing weight, no break-in time, and longer durability. They also tend to have smaller barrels and sweet spots when compared to full composites.