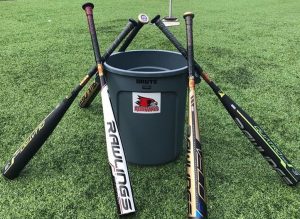 Few bats have more traction in the high performance bat space than the 5150. That’s because it has a lot of things going for it. First, it has a great pedigree. Second, it has a nice price point for a high end bat. And third, its reviews, year after year, have always been stellar.


The 5150 title, named after the type of alloy used in the bats, has been used for several generations of alloy bats made by Rawlings. Originally, as far as we can tell, in 2009 Rawlings was using 5150 to help describe their original exogrid.

This allows the 5150 to have a lighter swing weight—as its end cap weight is composite material. As a result, the 2015 version of the 5150 has a marked swing weight decrease compared to its predecessors (2013, 2014).

Based on early reports, there are more than just a few 5150 lovers who aren’t very happy with this years version. We, on the other hand, like the idea of a lighter swinging one piece with the Velo’s end cap in the sub $200 range.

Depending on who you ask, the 2015 model did come with an upgrade (beside the obvious paint job color up). The end cap on the 5150 has become just like the Rawlings VELO end cap. This means, in part, the end cap–which is made of composite–is now fused onto the barrel of the bat.

No doubt about the 5150 from 2014 was stellar bat with fantastic ratings. It may take some time for the new comp-lite end cap of the 5150 to catch on to 5150 aficionados–but with the full might and power of Rawlings behind this market saturating one piece we expect folks will eventually come around.