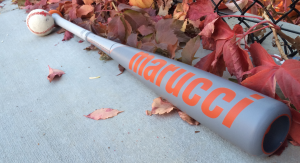 This bat, the Elite Limited, is an update and improvement from the Marucci 2014 Elite. This is not the Elite Limited, but another short print bat Marucci did of the OPS One. The 2014 version had favorable reviews. Many were particularly impressed with the micro-perforated grip as well as its very balanced swing. They were also quite impressed with the length of the extended barrel. All of these traits are apparent in the 2015 Marucci Elite Limited as well.


In addition to the full composite 2015 Marucci Hex, which we reviewed earlier, Marucci is also set to release a hybrid bat in its senior barrel category.

We recommend the 2015 Marucci Elite for hitters who: Can use a Senior League Barrel; Need or prefer a light swing weight; Like the sting dampening of a two piece bat
Are on a somewhat limited budget; Want to improve their contact or on base skills; Want what could be the best looking bat on the market.

But if your goal in life is to send balls toward the international space station, then the Elite in the drop 5 might be your answer. The drop 5 is, aside from the CAT 6,  Marucci’s answer to the little leaguer whose focus is more distance than OBP.

In the cage, we found that the feedback in the hands of the 2015 Elite was a bit more honest (by honest we mean noticeable) than other two piece hybrid bats. This is not necessarily a bad thing. Honest feedback is a desire for lots of hitters–which is why lots of folks are fans of one piece bats. In addition, more feedback in the hands is directly and positively proportional to the power found in the bat. Bat’s whose transition points absorbs all the vibration almost always imply a loss of power at the plate.

Overall, we think the seamless two piece hybrid bat from Marucci is a legit mid-shelf bat in the hyrbid space. Its main competitors are the NVS Vexxum from DeMarinni and 715 from Louisville Slugger. It’s barrel size is much like the 2015 Catalyst. While the focus of the NVS is more feel at contact and the 715’s focus is more a higher swing weight, the Marucci Elite Limited beats both in its light swing with extended barrel and graphics. Those looking for a light swinging hybrid in the senior barrel category need not look any further.

We also would be amiss for not mentioning the graphics on the 2015 Marucci Elite Limited. We know that has between zero and nothing to do with how far you hit the ball, but between the Marucci CAT 6, Hex and now the Elite Limited, Marucci takes the prize on best looking bats for 2015. And I’m not sure it’s even close. Easton’s bats, which took the prize last year with the neon orange MAKO, now look like kids toys compared to Marucci’s 2015 line.