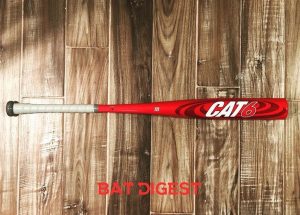 JustBats purchased the exclusive rights to the CAT 6. That is, the updated look on the CAT 6—with the red base and white accents—is a JustBats only bat. The expectation, as far as we understand it, is that such will be the case indefinitely. Making such an arrangement, as far as know, a first.


The new CAT 6 is nothing new structurally from the older CAT 6. But, in so many ways, that is not a bad thing at all…

The CAT 6 has been one of the highest rated bats ever. It has great sizing options, feels great and prices right where most people want it to be.

It has a middle of the road swing weight and uses the same proprietary knob found in new CAT bats from Marucci.

As a general sentiment, we’d recommend the bat for any player that prefers the stiff feel of a single piece bat and is looking for a real value purchase. The sizing options at JustBats make it available for any player. The heavier the weight (drop 8, drop 5, BBCOR) the more we tend to prefer to the CAT 6.

The Cat 6’s sting dampening knob makes it otherwise unique. No other bat uses such a tech (they can’t as Marucci has the patent). But, you can find some single piece aluminum bats from 2016 in the Omaha 516 and the Rawlings VELO. Both are legit choices, a bit ligther and also run a bit cheaper.

For the CAT 6 Generation 2 you can find similar bats in, wait for it, the CAT 6 Gen 1. As well as bats like the 519 Omaha and 5150 from Rawlings. None of them have the technology in the knob or as big a barrel—but they also cost less.

The previous version of the CAT 6 was the CAT 5-squared.

We aren’t quite sure the best version to compare to the CAT 6 Generation 2. It doesn’t have as a many thickness levels in the barrel as the CAT 8–which has 8 instead of 6. The aluminum has been upgraded, but not by much, since the CAT 6. In large measure the bat is a lot like the CAT 8—but Marucci has made legitimate upgrades in the last 4 years. Worth the $100+ more? That’s not a decision for us to make.

Here’s what we wrote originally about the CAT 6 Gen 1 in comparison with the CAT 5-Squared.

Also like the CAT 5-Squared, the CAT 6 is a balanced swing. The balance point of the bat was actually brought a little closer to the handle compared to the CAT5 but the overall weight distribution makes the CAT 6 and CAT 5-Squared swing weight nearly identical.

The CAT 6 does have some upgrades compared to the CAT 5-squared that are worth mentioning. For starters the barrel profile is larger. Meaning the bat has more plate coverage and a larger sweet spot when compared to the CAT 5-Squared. We found this improvement to be noticeable and appreciated.

As well, the durability of the knob is claimed to be improved. We haven’t swung the CAT 6 long enough, but we do know from personal experience that the CAT 5-Squared knob unscrewed itself (which you could screw back on) after considerable use. Marucci took this feedback and redesigned the inserted knob to last as long as the bat. If that is the case we will see, but we are willing to take their word on it for now.

Another notable change to the bat is its design. The CAT 5-Squared was designed in gray backing with black and red highlights and a black grip. On the CAT 6, the bat is a very glossy pearl white with sort of hologram hurricane circles in the design. (Get it? CAT 6, Hurricane, as in a Category 6 Hurricane?). The grip is gray to match the highlights on the bat.

On the BBCOR version of the bat Marucci also shaped the handle to transition into the knob. This larger widening handle increases the bottom hands contact to the bat which many hitters like. Those who like a skinny bottom hand handle can unwrap the tape and remove the plastic shaped cone on the bottom of the handle.