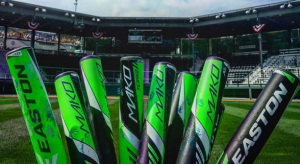 With the Easton MAKO and MAKO Torq getting all the publicity these days, the industry may be missing a new concept bat in Easton’s 2015 Power Brigade lineup. The new S3z for 2015 incorporates what Easton learned in the all-aluminum S3 from years past and combined that with some industry tricks to create a long-barreled one-piece aluminum stick with a patented composite internal sleeve.


Those BBCOR hitters looking for a full piece aluminum bat with a brand bat may want to take the S3z for a spin. We think it clearly an improvement over the BBCOR S3 from years past. Any one-piece aluminum hitter who prefers a light swing weight should probably have this big barreled aluminum bat from Easton on the shortlist.

Like the 2015 Easton S3, the S3z has is a full one-piece aluminum outer shell. The aluminum alloy is Easton’s 2015 new HyperLite aluminum–which is used in all their high-end aluminum speed series bats this year (S2, S3, S2z, and S3z).

Unlike the 2015 Easton S3 and any of its previous iterations, the S3z incorporates an internal composite sleeve. This thin sleeve gives added strength to the thin-walled aluminum which, in turn, allows the bat to have an extended barrel without a decrease in durability nor an increase in swing weight. Easton is referring to this technology as Z-Core internal technology. The Z-core name, if that sounds familiar, is a shout out to the greatest bat ever made.

We thought the 2014 S3 from Easton often suffered from too small of a sweet spot and a bat that was nearly too light to create any mustard on hits. The added barrel length in the S3z and its attention to a more balanced swing (instead of a handle load) are definitely improvements.

The bat, to some extent, reminds us of the original Exogrid bat from Louisville Slugger. I am sure Easton (or Slugger) wouldn’t accept that comparison, but an internal composite sleeve on a full aluminum shell has been done before. And, for what it’s worth, the Exogrid was a very good, if not a bit heavy, bat. The S3z, with its new HyperLite aluminum alloy blend, does have addressed sometimes ‘too heavy’ complaint the ExoGrid suffered from.