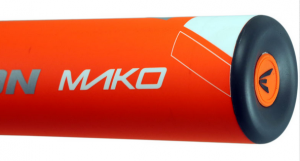 After almost 5 years of experience with the 2015 Easton Mako we have more than a few things to say. But, to put it quickly, the bat is legendary. The 1.15 2 1/4 barrel pre-USA bat was the stuff dreams are made of—and still are. It is still a legal bat in USSSA play—the smaller barrel does not disqualify it. However, the bat is not allowed in USA play.


In short, the 2015 Mako is quite good. It is surprising, at least at the time of this re-write, the bat is still available from sellers in BBCOR sizes at a fraction of the price. We think these bats are worth your time to consider and if you can find a good price then jump on it.

The 2015 Orange Mako is a legend. It stands as the pinnacle of 2 1/4 USSSA bats—where Easton dominated by a wide margin.

In 2015 the major competitors for the Easton Mako were the other two piece composite bats on the market. That included the 2015 DeMarini CF7 as well as the Slugger’s (new at the time) 915 Prime. In terms of market share for 2015 the Mako absolutely dominated.

Easton returns the very popular MAKO bat for 2015. The bats penetration and hype in the market for 2014 was nearly unbelievable. Most retailers claim the 2014 release marked the start of the best selling baseball bat ever seen. It’s over-sized barrel, at the time, was unrivaled. It’s neon was recognizable from a 350 feet out. It’s hype and buzz were perfectly marketed and timed.

Easton’s 2015 Mako is a two piece composite bat. That is, the handle and barrel are made separably, out of composite, and then put together with a connective piece. That connective piece determines the feel and stiffness of the bat at contact. In large measure, the connective piece will make or break a bat. The Easton Mako connective piece (called the CXN) is as good as they come.