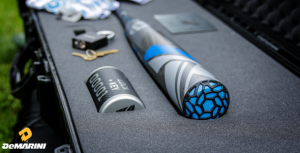 The forefather of modern-day two-piece bats is the CF7. We liked the CF5, but the CF7 is another level. It is the precursor to the CFs of the 2020s and not much has changed. If you can find one of these bats on a secondary market we’d say get it.


In our release review of the DeMarini CF7 mid last year we praised the bat line’s 2015 iteration, struggling to find anything wrong with it. We even wrote, rather naively at the time, “The bat comes in every imaginable size”. DeMarini R&D probably had a good laugh (assuming they even read this stuff), as we realize rather sheepishly now, that  we were flat out wrong.

To our defense, the Voodoo Overlord has been DeMarini’s designated drop 5 bat in years past, with stratosphere-scraping power, so we thought they had their bases covered. But, what about the players looking for a DeMarini brand bat where the center of mass is felt more in the hands or barrel (instead of end cap) that also has the butter-like feel of a high-end two piece composite?  As of last year, they were out of luck.

These bats will have all the traditional features the CF savants have come to love: D-fusion handle, advanced connective piece and a performance two-piece composite tuned to the maximum allowable performance. Better yet, (as if this can get any better) the CF7’s barrel has been extended noticeably. And in a 33 length too? Its a verifiable monster.

In the 2015 class the most comparable bat is Easton’s Mako. It, too, is a two piece composite bat with a big barrel, light swing and monster smash.. You might also take a look at the 2015 915 Prime from Slugger. Although in its first year of product it makes a legit offering—and in the secondary market it is remarkably less expensive than the CF7.

As an update, DeMarini upgraded on the success of the 2014 CF6 and the 2014 Voodoo Overlord with durability. As well, for the CF7, the swing weight has come down compared to the middle balanced CF6.

The CF7 is a two piece composite bat with a big barrel and a light swing weight. At the time of its construction in 2015 this was a unique piece in the market and Demarini crushed it. Many companies now follow suit and try and create this type of bat.

DeMarini’s use of a connective piece and high end composite still work today. And, in large, measure, the bats produced today are not much different than the 2015 DeMarini CF7.

The catch, of course, is that the bat can’t be swung by everyone. Because the bat is heavy, you’d need high school strength to swing it, but without BBCOR certification, no one in high school can take it to the plate.

This makes the pool of hitters rather small, leaving this gem to the biggest, strongest hitters not yet playing at the high school level. But we are real confident in claiming that if you can swing it then you should swing it.

We’ll hold off just yet in declaring it the best drop 5 baseball bat of 2015 as we see how the season plays out and other player reports come back on the bat. But if you are an elite travel ball player looking for the best drop 5 bat on the marketand have a budget willing to spend what it takes then we have no hesitation suggesting that your search should end here.

We took the bat in the cage and honestly have a hard time remembering any bat we’ve ever hit with before. The bat is down right enchanting. With the balance felt right smack in the middle of the sweet spot, this oversized performance bat should star in an infomercial hosted by the New England Patriots on how to deflate balls.

How much did we like it? Well, if making our top 5 youth baseball bats of all time isn’t enough then we’re not quite sure how else to tell it. The CF7 drop 5 is as much of an ever loving rope-making, gap-blasting, center-field-light-smashing, infield-playing-in-the-outfiled baseball bat we’ve ever swung. In the post accelerated-break-in era of governing allowable pop, the DeMarini’s CF7 drop 5 raises the bar in the performance bat and elite travel player space.