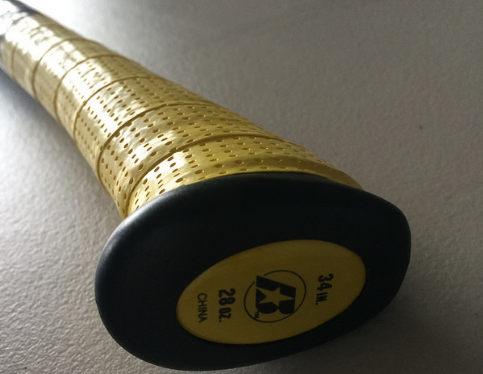 Those who have read this blog (or those who have paid attention to the bat space for more than just a few minutes) know that bat hype these days is more emphasized than bat performance.

Buckets full of money are spent flooding the market with these ‘hypchanics’, the mechanics of hype.

You may also find our many of our new axe bat reviews helpful too.

Buckets full of money are spent flooding the market with these ‘hypchanics’, the mechanics of hype.

You may also find our many of our new axe bat reviews helpful too.

We all know one metal baseball bat, to a large extent, can’t be manufactured to be much different than the next one. Don’t get me wrong, there are clearly some nuances that are worth noting and purchasing, but it seems that among the good dozen or more of top shelf bats, the differences are more often than not, negligible. Ultimately, we base bat decisions on a function of a bat’s swing weight and contact feel. But what if a piece of hypchanics was a solid hit?

We recommend the 2015 Avenge Axe bat: for hitters who: are looking for a top shelf bat; want top end bat speed without sacrificing barrel mass and effectiveness; are not on a budget; are looking for a competitive advantage that really works.

We do NOT recommend the 2015 Avenge Axe: bat for hitters who: are on a budget; looking for a really light swing; want an end loaded bat (although they could just up size).

It is with that backdrop that I picked up an Axe bat, from Baden Sports, for the first time. The bat, as you can tell from the pictures, has a handle that is shaped like the handle of an ax. In theory, and in the data, the ax handle shape on a bat allows a hitter to pull their hands through the zone faster, giving a batter increased bat speed without decreasing the mass moment of inertia (MOI) of the bat. In other words, an ob-longed shaped handle, they propose, makes players hit the ball harder. Sounds like another drop in the river of hypchanics.

BUT here is what I discovered when I took the BBCOR Axe Avenge to the cage: It works. No really, it does. And not some placebo, hope-it-worked, sell-bats-for-the-company hypchanics. I have swung just about every 2014 and 2015 BBCOR metal bat on the market and have a pretty good feel for what getting my hands inside the ball looks and feels like. And this much I can say with certainty: the 2015 Axe Avenge Bat forces your hands to come inside the ball faster and, as a result, increases your bat speed. Such increased bat speed (without sacrificing the swing weight) creates a better hit ball. No hypchanics, no marketing spin. It actually improves your bat speed.

Asymmetric Handles: Does It Work?

But would faster bat speed be worth the awkward shaped handle possibly compromising my swing? Not a problem, I found the bat to be much easier to adjust to than I expected…although I do think I was holding it backwards for a minute until I took a couple of practice swings. The ob-longed or oval shaped handle actually starts to feel normal after just a few hacks and within a matter of minutes it felt like a natural extension of the bat. Oddly enough, when I picked up a normal shaped bat after about 50 cuts with the Avenge in the cage, it was actually the traditional shaped handles that felt awkward.

Another easy to miss benefit comes from the fact that a handle shaped like an ax forces you to hit with only one side of the barrel. Baden Sports (who makes the Axe Bat) refers to this as one sided hitting. They claim, and this actually makes perfect sense to a layman engineer like myself, that the ability to predict where contact will happen on a baseball bat dramatically improves an engineer’s ability to maximize durability and pop. Think of it like this – If you know exactly where the enemy will strike, you can focus your forces at the point of attack. Hence the reason a bat with one sided hitting can be more effective than one that needs to be prepared for contact everywhere. In a world of BBCOR regulations this seems like a serious competitive advantage.

Now for logistics. The 2015 Axe Avenge bat has a middle range swing weight comparable to the 2015 Slugger 515 Omaha or Adidas EQT X1. It is a two piece composite bat in the class of the S1, CF7 and 915 among others.

All in all the Axe Avenge makes for a very enjoyable hitting experience. The Axe bat with its ax handle shape is not a hoax or gimmick. It is not just another exercise in baseball bat hypchanics. The handle is a true innovation in the bat space and measurably improves the hitting experience. Those looking in the top shelf bat space should sharpen up their short list by considering the Axe bat.

The best place to purchase will be here. In the mean time, you can order on the Baden Sports Web Site here. Bats started shipping on 10/1/2014.