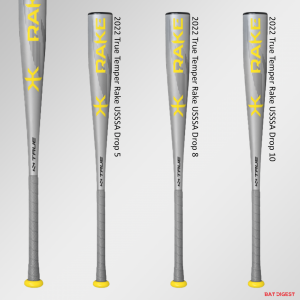 For 2022, True Temper has two lines of hybrid bats. The lighter swinging version, which comes on in USSSA drop 10, 8, and 5 only, is the RAKE. (The other is called the HZRDUS). The rake is built with a seamless connection from its composite handle and alloy barrel. This hybrid construction is focused on a more flexible feel, a reasonably sized barrel, and a lighter swing.


Although we await more feedback, our sense is the 2022 Rake will be liked for its lighter swing and more flex on contact. Although it looks like a single-piece bat, the smoother feel may even give some kids a better sense of the bat than it actually produces. The half sizes, too, are an interesting approach. Expect to find the exact right fit.

The 2022 True Temper rake is built for the USSSA player that wants a lighter swing on a hybrid bat. Although hybrids (alloy barrel, composite handles) are more prevalent in BBCOR today than they were a few years ago, that same trend has not stayed true for USSSA, which is dominated by composite barrels on two-piece bats. Still, though, bats like The Goods have made some headway in the hybrid USSSA market. We think a bat like the 2022 Rake in a drop 5 makes plenty of sense for the big hitter who wants or needs a drop 5 and a less flexible connection when compared to a bat like the HZRDUS (True Temper) or The Goods (DeMarini). The smaller drops in the Rake won’t be as loved as two-piece composite bats in the space, but the light swing and good flex should make them decent fits for the serious player who wants a good feel on an alloy barrel in USSSA.

Two piece hybrid bats in the USSSA space are somewhat rare and that is by design. Few think it is their go to. But, bats like the HZRDUS (a heavier swinging version of the same bat from the same company) and the USSSA The Goods from DeMarini are reasonable comparisons.

There are no version of the Rake before the 2022. This is the first time True has released the bat.

The 2022 True Rake is a two piece bat built with an alloy barrel and a composite handle but seamlessly fuzed together to make it look like a one piece bat. Its most unique feature is the seamless construction between the handle and barrel. While other hybrids have some type of connection piece, the Rake uses some proprietary True Temper skills to make for a seamless connection piece.

The world’s first one-piece hybrid is now optimized for maximum contact. The ALL NEW RAKE USSSA (-10) delivers maximum pop without sacrificing barrel control. The RAKE USSSA (-10) was designed for players that want to hit to both sides of the diamond. The RAKE USSSA (-10) bat features our proprietary AXENIC™ Technology that seamlessly connects the high performance EVMAX™ Alloy barrel with our SMARTPLY™ composite handle to deliver a hybrid bat with no connection joint. This unique construction removes all of the inefficiencies of traditional 2-piece bats. The AXENIC™ technology delivers the purest energy transfer from the swing to the ball on impact for maximum control. The composite handle reduces bad vibration on mishits, so it feels as good as it rakes. Finally, no connection joint means improved durability, less barrel lag, and more pop out of the wrapper.