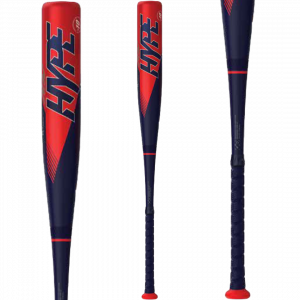 Easton’s latest and greatest two-piece composite is the 2022 ADV Hype. The non-drop 5’s are built for the contact hitter that likes a big barrel, light swing, and a great feel on contact. The best feature, we think, is the Power Boost knob which is a knob made of a pliable rubber that feels better on the hands. Performance looks excellent, and the “new” composite barrel, connection piece, and handle are intriguing compared to the ADV 360. The Hype does NOT come in a USA—Easton kept the ADV 360 intact for that line, and you can find that 2022 review here.

More than a few suggest the “new” Hype uses the “old” TCT composite from the MAKO series of bats and the end cap from older bats. Easton still claims the Thermo Composite Tech (TCT) on the 2022 Hype is “New,” so we aren’t sure exactly what to make of these claims circling the internet.
Regardless, was the 2017 USSSA Easton MAKO Beast in a 2 5/8 somehow superior to the 2020 Easton ADV 360? Don’t let anyone rewrite history here. From 2016 through 2019, the USSSA 2 3/4 and 2 5/8 market was entirely dominated by the CF in USSSA. Like, downright completely. Pre USA bat, the MAKO dominated the 2 1/4 market, and its TCT composite did unbelievable in that size. But, the 2 3/4 and 2 5/8 MAKO’s and their TCT composite were trounced entirely by the CF.
If this “new” TCT is the “old” TCT, why must it also follow that the Hype will potentially dominate the 2 5/8 and 2 3/4 USSSA market when it never did in the first place?
And why would Easton have gone away from the TCT in 2018 or thereabouts if it were so special?
None of that is to say the Hype isn’t a perfectly reasonable bat that will treat many kids the right way. Indeed, it may end up being the best two-piece composite 2 3/4 or 2 5/8 USSSA Easton has ever made. But, to put it perfectly frank, that isn’t a high bar to clear. No 2 3/4 or 2 5/8 USSSA Easton bat has ever been a must-buy (save maybe a 2017 drop 5 Beast X Ghost, but I digress).

This also isn’t to say this ‘new new is the old’ is what Easton is pitching (although I’m confident they’re willing to let that story run). But it is to say, when surfing your social feeds, be wary of the hype.

(Groan, that dad joke was too easy).


We haven’t had much experience with the ADV Hypes just yet, but the general feedback we are getting from the hitters are they like the big barrel and feel of the ADV Hype. Two piece composites are tough to differentiate these days, so it is hard to say if the bat is a considerable upgrade/chagne from the ADV 360. But, the bat has so far been well received and we’ll need more time to decide how much we really do like it.

Generally, two piece composite bats are built for the contact type hitter that wants as much barrel per swing weight as they can manage. The 2022 Easton ADV Hype satisfies that demand. If you have a limitless budget and want the very best Easton has to offer for that growing player and the good to great contact hitter then the Easton ADV Hype can be a great fit.

Amazon eBay JustBats
The 2022 Easton ADV Hype is Easton's top of the line BBCOR bat for 2022. It replaces the ADV 360 as the feature bat with a newly designed barrel, handle and connection piece. Although still a light swinging two-piece composite bat, it is different enough to be considered a measurable change from the 2021 Easton ADV 360. The price, you will note, is also the most expensive BBCOR bat Easton has ever tried to sell.
Sizing: 30, 31, 32, 33, 34-inch
Release Date: October 7, 2021
Serial: BB22HYP
Bat Type: Two Piece Composite
Barrel Size: 2 5/8
Similar BBCOR Bats

Dicks Sporting Goods Amazon eBay JustBats
The 2022 Easton ADV Hype in USSSA is an all player and fields bat that comes in more sizes than any most other brands and models. If you want a drop 5, 8 or 10 in different barrel diameter then you have an option. The drop 5 is only in the 2 5/8 while the drop 8 comes in the 2 3/4. The drop 10 Hypes come in both a 2 3/4 as well as a 2 5/8 version. Sizing ranges from a 27 inch up through a 32. There really is a bat option for every type of player. We like the drop 5 and it can do damage in the right hands. The drop 10 is built with that light swinging gap power type hitter that needs and wants as much barrel per swing weight they can manage.
Sizing: 28, 29, 30, 31-inch
Release Date: October 7, 2021
Serial: SL22HYP108
Bat Type: Two Piece Composite
Barrel Size: 2 5/8
Similar Drop 10/11 USSSA Bats

There are plenty of two-piece composite bats comparable to the ADV Hype.

The new Hype appears to use the same TCT composite as was used in the MAKO versions of bats. We aren’t convinced they are exactly the same although the names are. For the 2022 Hype, Easton changed the handle, barrel, and connection piece.

Meet the newest member of Easton’s prestigious family of bats – The 2022 ADV Hype™ offers the ideal combination of a massive barrel and sweet spot with a light swing weight for explosive power at the plate. The ConneXion Max™ taper is injected with Nitrocell™ foam to maximize energy transfer, produce a stiffer feel on contact and reduce vibration on mis-hits. The Pro-Stiff Carbon Handle™ is specifically designed with extra-stiff carbon fibers to create a more solid, stiffer handle that elite players love, while the Power Boost™ Soft Knob gives hitters with more leverage to improving bottom hand comfort.