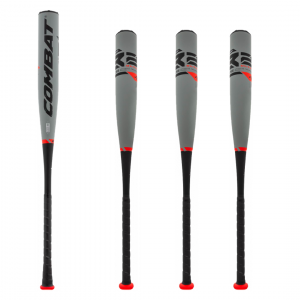 The 2022 Combat B2 Ultra is a BBCOR and USSSA (drop 11, 10 and 8) produced and sold exclusively by JustBats.com. It has a huge barrel, light swing and is built after the Combat Maxum of days gone by. This is, effectively, a reprint of the old Combat Maxum bats circa 2018 that JustBats (via their parent company Pro Athlete) purchased and distributes. Those Combat Maxum bats were very well received and, in the right hands, hit the ball a country mile.


The 2022 Combat B2 Ultra is as curious as they come. Not to bore you too much, but in terms of history, the Combat was a Canadian composite bat company that produced BBCOR and USSSA bats with huge barrels and light swings. Around 2018, or so, Combat’s parent company claimed a chapter 11 bankruptcy and the parent company restructured Combat under Easton, a sister company. Combat became defunct.

But not so fast.

During that restructuring, as far as we’ve been able to gather, some of the intellectual property (or rights to it) as well as the remaining Combat inventory moved to Just Bats.

Easton also began producing a Combat in the Combat Maxum, which exists until this day.

In an unexpected twist, By 2018, Just Bats had reproduced the Combat into their own version named the B2. That B2 was JustBats’ last hurrah in the Combat bat space as they maintained the rights to reproduce a bat in the Combat name. At the time, someone at Easton told us they did not maintain those rights forever.

But that, of course, is when Easton was actually a company.

The 2022 Combat B2 Ultra is a surprise to us. JustBats has clearly retained the rights to reproduce the Combat B2 despite Easton’s continuation of the Easton Combat Maxum (under the Rawlings umbrella who acquired them last year). We are not sure, and likely never will be, if Rawlings acquisition by Easton made Just Bats intellectually property play more possible.

In any event, what once was once lost, now is found. Long live the Combat Maxum.

JustBats
The BBCOR 2022 Combat B2 Ultra, we expect, to have a huge barrel, balanced swing, and meet the BBCOR standard as well as anything. How it will stack up with the older combats or its distant cousin, the Easton Maxum Ultra, is yet to be seen. But, we are keeping a close eye on this great looking BBCOR bat from JustBats.
Sizing: 31, 32, 33-inch
Release Date:
Serial: BBPAB2
Bat Type: Single Piece Composite
Barrel Size: 2 5/8
Similar BBCOR Bats

JustBats
The 2022 Combat B2 Ultra is a JustBats sponsored bat and is, in most ways, the same as the old Combat Maxum from days gone by. The Drop 11 is a USSSA 2 3/4 barrel built with a light swing, absolutely massive barrel and really good performance.
Sizing: 27, 28, 29, 30-inch
Release Date:
Serial: SLPAB211
Bat Type: Single Piece Composite
Barrel Size: 2 3/4
Similar Drop 10/11 USSSA Bats

JustBats
The drop 8 for the B2 Ultra is a big barreled bat with a huge barrel and a great swing. Although we don't know much yet, we expect the bat to be a lot like the B2s from days gone by in the Combat space. JustBats, some years ago, picked up some rights to the Combat name when Combat went out of business (via bankruptcy). Easton, a sister company, took over much of the Combat umbrella. But JustBats picked up enough to secure some naming rights in the future. As well, and we don't know, Easton's acquisition by Rawlings may have left some Combat items on the table too. We'll keep asking around.
Sizing: 29, 30, 31/28, 32-inch
Release Date:
Serial: SLPAB28
Bat Type: Single Piece Composite
Barrel Size: 2 3/4
See other Drop 8 USSSA Bats

JustBats JustBats
The 2022 Combat B2 ATB Drop 10 USSSA Bat is a single-piece composite built with a huge barrel and light swing. This is a JustBats produced and backed bat and a reprint of the 2020 version that was white with black lettering. This bat is available on JustBats directly but don't expect it to be found elsewhere (except for maybe eBay occasionally). The drop 10 JustBats/Combat B2 is a big barrel and a light swing and built like the Combat Maxum of days gone by (circa 2018).
Sizing: 27, 28, 29, 30, 31-inch
Release Date: November 1, 2021
Serial: SLPAB210
Bat Type: Single Piece Composite
Barrel Size: 2 3/4
Similar Drop 10/11 USSSA Bats

Single-piece composite bats are not typical in the space. However, the few that do exist are worth considering. We like the Combat Maxum (from Easton) a lot. And Dirt South’s MADE lines get a lot of good reviews too. If you want a single-piece composite bat with a big barrel and light swing, you don’t have a lot of options. But the ones you do have are usually quite a bit good.

Compared to the 2020 version of the bat there are no changes other than, at least according to our records, a drop 8 in lieu of the drop 5.

Or, we will venture a guess, the drop 5 2022 version will appear on the shelves when the 2020 version finally sells out on JustBats.com.