Zepp Labs lost a patent infringement case against Blast Motion. As such, they can’t sell the Baseball Bat Sensor in the United States anymore.

However, you can still find them online or in the used market. These reviews if for them.

If this is the first time you’ve heard or seen the Zepp Labs baseball sensor, then be prepared to feel like you’ve gone to the future. You may exclaim, as Doc Brown would, “Great, Scott!” Our general feelings are that this little gadget can and just may raise the bar of hitting instruction across every baseball level. But before we start slobbering all over ourselves, let’s first detail the functions of the technology and see if we can’t find a grievance or two in our Zepp baseball review.

The Zepp baseball sensor is a 0.4-ounce gadget that fits inside a rubber grip (called amount), which attaches to the knob of a softball or baseball bat. The sensor is a gyroscope and accelerometer—meaning: when the Zepp Labs sensor is attached to the bottom of a bat, it can determine both the bat’s orientation to the earth and how fast and what direction it moves.

The Zepp Labs sensor records these orientation and movement data points and transfers the information to an app on your device via Bluetooth. It only transfers the relevant data gathered around the time the bat makes contact with the ball. The app then aggregates these data points and places a series of charts, tables, and graphics for perusal at your fingertips, literally.

The combined data creates metrics the average (and not so average) baseball player has never before seen. To name some of the insights the app provides:

This data is then stored under the selected player’s profile and the bat they were using when the data was generated. You can review any swings in aggregate under the labs’ report section or individually through the calendar at any point in the future. Here is some data my 10-year-old son and I generated: 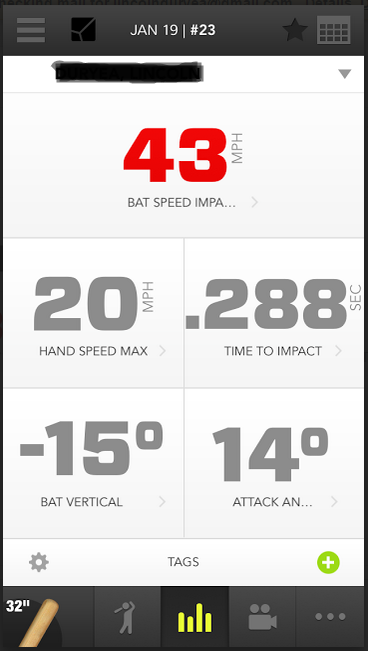 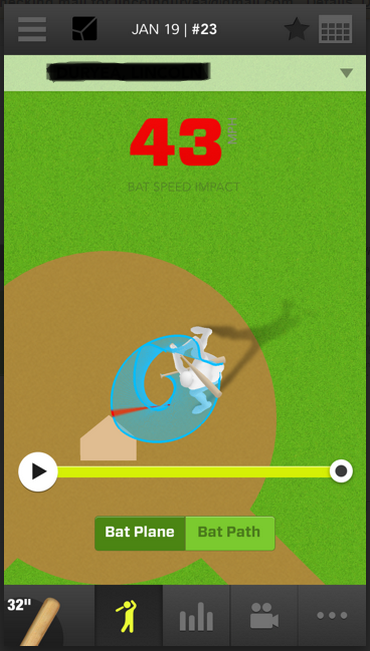 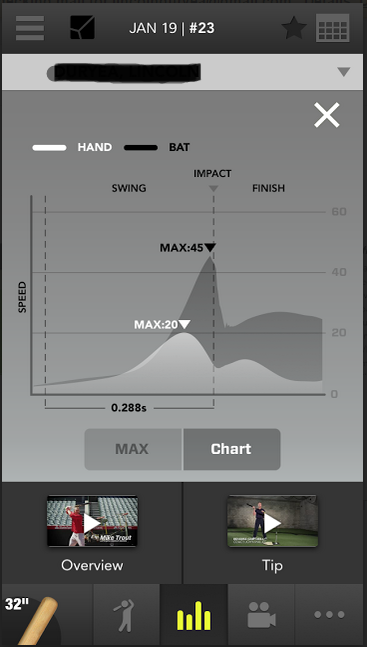 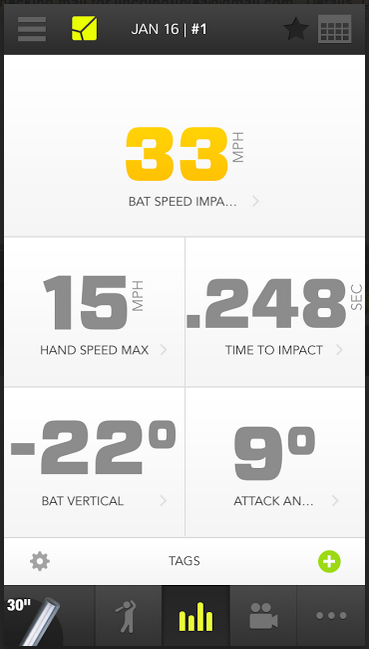 If you’re impressed so far, get ready to have your pants blown off–we haven’t even started with the cool part yet. The app can capture video of the swing two seconds before and one second after contact–it knows where to capture because the accelerometer tells it there was impact.

This video clip is then filed away with the other data the sensor gathered. You can review these videos with toggled slow motion anytime later. We found the video review of the hit more valuable than the actual data points. The two modes create a bag full of insight no generation of baseball players has ever experienced. 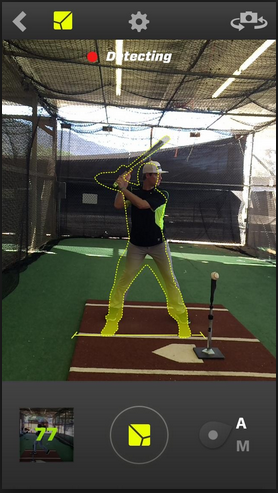 For example, observing how my son swings a 32 inch Marucci Hex Youth barrel compared to Jose Altuve and his 33 inches Sam Bat in slow motion proved as valuable as any hitting instruction he’s ever received. That is without hyperbole. That few moments of insight comparing his swing to his favorite player’s swing was the most significant piece of hitting feedback he could have ever received, and I could have ever given him.

As you can see, and as my son recognized without anyone’s help, Jose drives the top half his body through the baseball, whereas my son takes it leaning back. Jose also drives forward well enough that his back foot actually comes ever so slightly off the ground at contact—my son has too much weight back. Jose’s swing is also remarkably compact–my son’s a bit too far away from his body. We toggled through the side by side video for several minutes, and he and I quickly noticed the similarities and differences without debate. In a matter of minutes, my son’s swing improved. 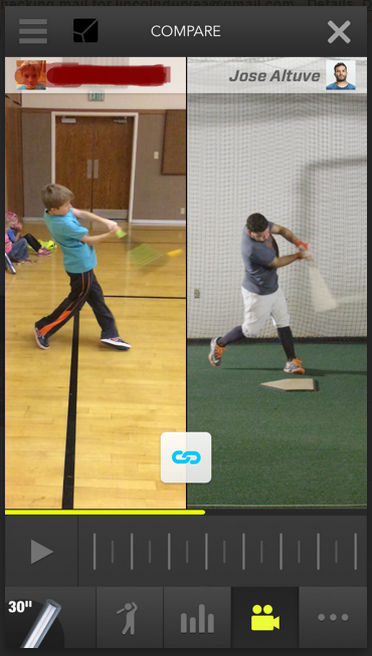 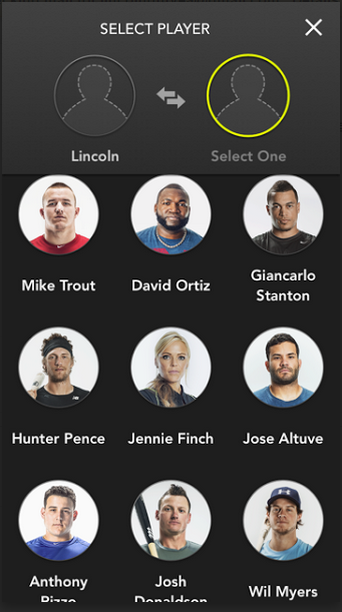 And Zepp Labs baseball sensor benefits are not done yet. The technology includes a catalog of tips, drills, and videos the app suggests based on the deficit of skill reported in the metrics. John Mallee, hitting coach of the Cubs, even has a few cameos in the tips section showing you different drills for any number of topics: bat speed, hand speed, attack angle, and so on.

Additionally, after just a couple of hours of use, I increased my hitting instruction’s consistency by several multiples. I knew exactly what I was talking about and had video and data evidence to prove it to myself and them.

I also realized, because dad had to try it out, that I’ll never be able to have bat speed of 90+mph and, maybe even more embarrassing, the harder I try and swing, the more ridiculous I look–especially in slow motion.

If you couldn’t tell from the above, we are thoroughly enamored with the gadget’s form and function as well as the app’s interface.

In fact, so enamored that we hesitate to point out things we wish were a bit different. But since this is a review, let us put our objective hat on.

First, the app is an absolute battery drainer. Running Bluetooth, video, and internet (to sync profiles) sucks down your battery like nobody’s business. If you plan to use this during a game or far away from an outlet, make sure your battery is charged to the rafters.

Second, a couple of bat companies are not in the drop-down menu, so you need to put their names in the ‘generic’ category. From what I’ve gathered, this isn’t Zepp’s fault but the bat companies–who need to opt-in. So, RIP-IT and Baden Axe: READ YOUR EMAIL.

The third issue is not so much a complaint as it is a caution. It’s also more philosophical than any real fault in the device. The data gathered by the sensor and app is so prolific that it might push players to over-complicate hitting a baseball. The app does try, and on the whole succeeds, in giving us tangible directions for improvement. Still, you don’t actually need to be a physicist to hit a baseball, and this app might give players, especially young ones, too many chances to over-think their swing. 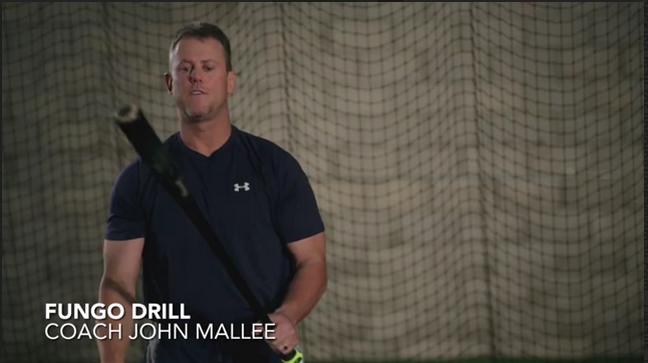 For example, I can imagine a little leaguer with the Zepp Labs sensor attached to his bat knob more worried about his bat speed than a bunt sign from the third-base coach.

Despite that caution, which is avoided with a healthy dose of reality, we think this device is an absolute win. Anyone serious about improving their swing should be able to benefit from this technology.

From a coaching perspective, we most appreciate the accuracy and consistency with which our hitting instruction can be explained and recorded for our players. With everyone including their grandma’s two cents of hitting instruction to wade through, hitters will find with the Zepp Labs baseball sensor and a competent coach, advice that is applicable, verifiable, and actually possible to perform.

The $150 price tag may cause many to balk–and as a father of three boys in baseball, we 100% agree on controlling the budget. But compared to the price of bats, private hitting lessons, or travel team fees, the $150 isn’t asking much. (The best price, as far as I could tell, was here or here).

As well, something to consider, the device is so transferable that going in as a team, league, or a couple of different players makes it even more accessible, and we’d recommend that route to most. (If you go that route, make sure you pick up some extra mounts from here).

Also, the same sensor is used in the Zepp Labs golf swing app and tennis app. Just pick up those mounts, too, and you now have private golf lessons. So not only a baseball app swing analyzer for your team or group of players but a golf swing analyzer and a tennis coach for a one-time fee of $150? The pricing isn’t free, but it isn’t crazy either.

The app keeping track of your cuts, measuring improvement in your swing speed, a graphical representation of your hands getting inside the baseball, and comparing your swing’s finest points to those who have perfected the craft is an absolute treasure trove of information that was heretofore unknowable.

This little gadget should find its way, at some point this year, onto every little league, high school, and collegiate player’s bat who wants to improve his hitting.

And if that isn’t slobbering, we don’t know what is. Two big thumbs up.

(What will they think of next? As my son suggested, maybe a pitching wrist band to measure arm speed and trajectory? Make it happen, Zepp!)

What happened to this sensor? It is no longer available for purchase from Zepp Labs or just bats? Is there another option that is as good?