Our VARO Baseball bat weight (Amazon Price Check) review comes after 10 hours of use with the specialized bat weight compared to other donuts on the market. The VARO is a high end bat weight that comes in two versions. One version focuses on creating a balanced swing with a focus more toward the middle of the barrel (called the COR), and the other version extends the weight of the bat toward the end cap (called the ARC) creating an end loaded feel.

Like Lizard Skin Grips, the VARO bat weight system has taken over MLB on deck circles. Where it was once a very traditional bat weight donut in the circle, most on deck circles today have a bright team-colored VARO that most players use. 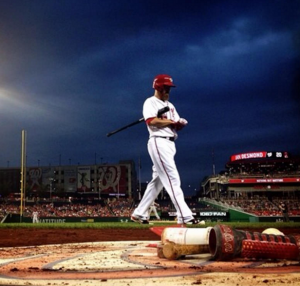 At first glance it is obvious the VARO bat weights are much more than a traditional donut. For starters, they are much larger and extend along the length of the barrel. The claim VARO makes, and this makes enough sense for us to reword it, is the added length protects the sweet spot of the bat from chips and dings. We appreciate this by way of an aesthetic feel, but we can’t imagine a paint chip on the barrel that could possibly affect performance—that would be one serious paint chip. This doesn’t mean we dislike the principle of protecting the sweet spot, indeed we do.

Second, the VARO bat weight, because it’s spread across the length of the bat, does not change the balance point of the bat insomuch that it feels like a sledge hammer. As such, it allows for a more natural swing where the knob of the bat does the driving, unlike more traditional bat donuts that put excessive weight toward the end of the bat and force the end cap to the driver’s seat of a warm up swing. The VARO makes a definite improvement in a warm up bat.

The VARO bat wieght comes in three different sizes—each built for a different type of bat and to recreate a heavier type of swing. There are two versions in the ARC series of VARO bats. The ARC extends the weight of the bat toward the barrel and end cap, giving your warm up swing a heavier load toward the end cap and barrel. On some bats the ARC actually extends beyond the length of the bat. It is preferred by most players looking for a good warm up swing—the ARC is what is used in most MLB on deck circles. 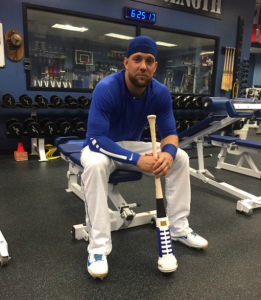 The COR version of the VARO bat weight (opposed to the ARC) sits in the middle of the bat to give it a more balanced swing. The weight also protects the sweet spot of the bat with an extended look that hugs the bat instead of grips into the barrel like traditional donuts. It only comes in a 2 5/8 version (this can fit a 2 3/4 bat) in a 20 ounce weight.[/ezcol_1half_end]

On the whole, it’s not hard to get behind the VARO bat weight system. They look great, they are used by MLB teams and they legitimately recreate a more natural feeling swing when compared to traditional bat donuts which. Good new as it turns out traditional donuts have been proven to not be very effective in terms of improving hitting. The price point over $30 might turn some folks away considering a traditional bat weight is all of $5 if you buy at the right place, but you are getting more than just a donut with the VARO.

Why do they place the 12oz weight at theend of the bat and the 20oz lower on the barrel? If you calculated the effective weight (as perceived by the swinger), there’s probably not alot of difference.

Is the cor better than arc?