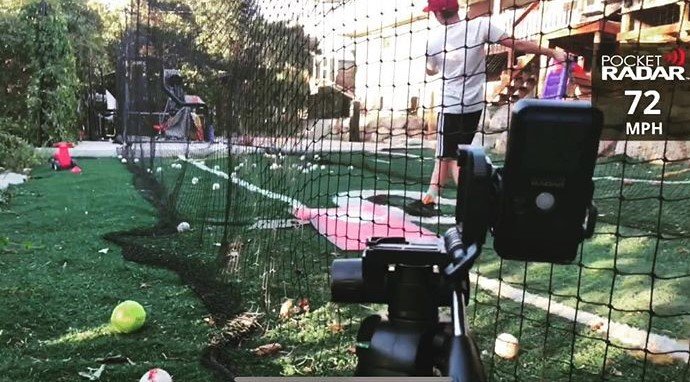 The Pocket Radar Ball Coach has been on our holiday gift guide for 2 years running. It might be run off the list this year. Not because we stopped liking it (we use it all the time), but because Pocket Radar released a Smart Coach version. This new version has a number of functions that are made possible by a Bluetooth connection within the radar. This tech, coupled with an app on your smart phone, make tracking ball speeds remarkably simple and smooth. The Smart Coach is the Ball Coach on steroids. 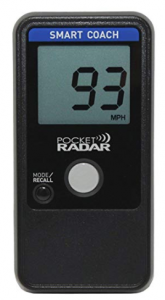 See below for more differences.

Find this on Amazon. You can also check out the Smart Coach directly on the Pocket Radar site.

We talk about the functionality and accuracy of the Ball Coach in our Pocket Radar Ball Coach Review. In short, it works. As long as you are able to stay inline with the ball (either behind a backstop or directly behind the pitcher) you’ll get accurate readings. (We tested ours against a Stalker Sports 2 Gun—which we ended up selling because the Ball Coach filled all our needs). That radar technology, which we like so much in our Ball Coach, is also in the Smart Coach.

The Smart and Ball Coach both have a hands free operation option, memory recall, accurate inline readings and a 120 foot range. As well, if you buy it from the right place, you get a 2 year warranty too. 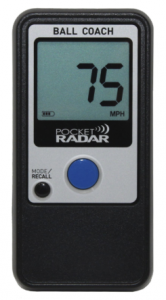 The real magic in the Smart Coach, and why it prices out about $100 more, is the Bluetooth functionality. The Smart Coach connects to your smart phone’s app without wires. This allows the speed readings to manipulate a Pocket Radar app that tracks exit speeds and repetitions as well as syncing that information with video and providing a history.

This connection gives you several more features not available on the Ball Coach. Those include:

If all you need is the simple exit speeds on an occasional pitch or two—or an exit speed on a hit ball—then the Ball Coach should serve you well. However, if you’re looking for more data tracking and a smoother ability to create video with speed readings then the Smart Coach will serve you perfectly.

Note, as well, the Smart Coach comes with the possible of working by plug as well as using batteries. The Ball Coach is only a battery device. 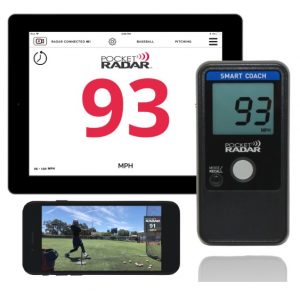 The exit speeds are as accurate as we have ever needed them to be. It does not do multi-directional radar—so hitting live pitching is a bit difficult to track and requires patience. But, tee work as well as pitching and any other type of sport where there is a predictable ball path will be easily tracked. It works up to 120 feet.

Because it is a radar it does not differentiate between baseballs, softalls, tennis balls, cricket or any other number of options that are moving. You could use this for soccer or just about any other sport that uses some sort of moving object (even bowling).

What might be the most unique feature, the Smart Coach can overlay speeds on the video. See our demonstration of this in the video above. We are not aware of any other device that delivers that feature.

The app also gives you the ability to control the radar from the app like a remote. So, as it is sitting across the field you can turn it on and get readings without ever needing to go to the device (assuming it is paired already).

Consider this too: the price on the Rapsodo is ten times that of the Smart Coach. Unless you need multi directional hitting metrics (like we often do for our exit speed tests) then you’ll find the Smart Coach to serve a ton of functionality in your baseball and softball coaching bag.