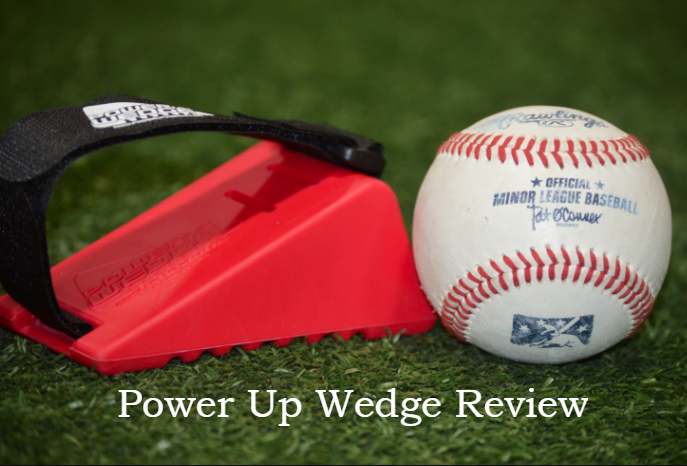 There is an abundance of baseball training aids on the market, and the price range varies greatly. It’s hard to know what is worth your money and what you’re better off passing in favor of saving for another bat.  We have tested one of those tools for you, the Power Up Wedge.  The Power Up Wedge baseball trainer is a versatile training aid that very well may end up being used for various disciplines in baseball and softball.

We watched a lot of YouTube videos about the Power Up Wedge. We think the one with Ashley Vanboxmeer was the most useful.

At a shade under $50, the Power Up Wedge is on the less expensive end of training aids, but not cheap enough to run out and buy one for yourself if you aren’t confident it’s going to work or if it’ll hold up to the abuse it’s bound to get.  Here’s what the the Power Up Wedge brings to the table:

The Power Up Wedge is intended as a training aid for both the offensive and defensive aspects of baseball and softball. We will get to some of those uses shortly.

The Power Up Wedge is made of a hard and rigid rubber with a strong Velcro strap.  It seems to be built to last, ours has around 300 swings in it plus some throwing mostly on a painted basement floor (with some turf use) and at this point there is no fraying in the strap and the rubber portion seems nearly brand new with almost no visible wear.  Seems to me that this thing will hold up long enough that you’ll feel like you got your value out of it.

Power Up Wedge Review: Ease of Use The Power Up Wedge is simple, and that is a good thing.  It doesn’t take an advanced degree to figure out how to make it work or to understand how it is helping.  It’s as easy as strapping it on your foot and getting to work.

We like that it can be put on and used by a younger player without supervision.  It can be a little tough for smaller players to tighten it and it may lead to the player needing to adjust the wedge periodically but it’s not a major impairment.  The Power Up Wedge can be used by the smallest and youngest player all the way up to an adult with a quick and simple adjustment of the strap on the bottom of the wedge.  It is also considerably smaller than other load trainers on the market making it less of a hassle to throw into a bat bag and take with you to practice or to the fields to hit. In baseball and softball a lot of a player’s strength and power come from using the hips and legs properly.  The Power Up Wedge trains a player to engage their lower half not just in the batter’s box but also when throwing the ball.  Its versatility is another reason we like it at its price point. Not many training aids are out there that can be used for offense and defense and even fewer at less than $50.

Hitting with the Power Up Wedge The Power Up Wedge is designed to be used with both the back and front side foot for hitting, you could even use one on each if you’re really adventurous.  We like it more as a back side foot trainer as we saw better results getting the hitter to not load too far back on their swing and activate the load with their instep instead of the outside of the foot.

It took some time to get adjusted to swinging with it on but after 10-15 swings it felt much more natural.  It can also be used for front side foot especially with a hitter that is landing soft or with their front foot already open.  We also saw an improvement in exit velocity and batted ball distance after a couple rounds of hitting with it.

Throwing with the Power Up Wedge Though we haven’t used the Power Up Wedge as extensively while throwing the ball, it does seem as though it would be a useful tool, especially for pitchers.  Strap the Power Up Wedge on the throwing side foot and train the body to use the legs and hips to throw the ball with more velocity.  It can also be used to train the pitcher to push off the mound.

Similar to using it for hitting, we did find it took an adjustment period to feel comfortable wearing it while throwing, but we noticed it felt easier and freer to throw the ball harder after some repetition.

The Power Up Wedge for baseball and softball is a useful, easy to use, and versatile tool.  It can be used independently even by younger players.  Its versatility as both a training aid for hitting and throwing make it a good value at its price.  We would recommend the Power Up Wedge as a training aid and especially for those looking to maximize their dollar on a good value.