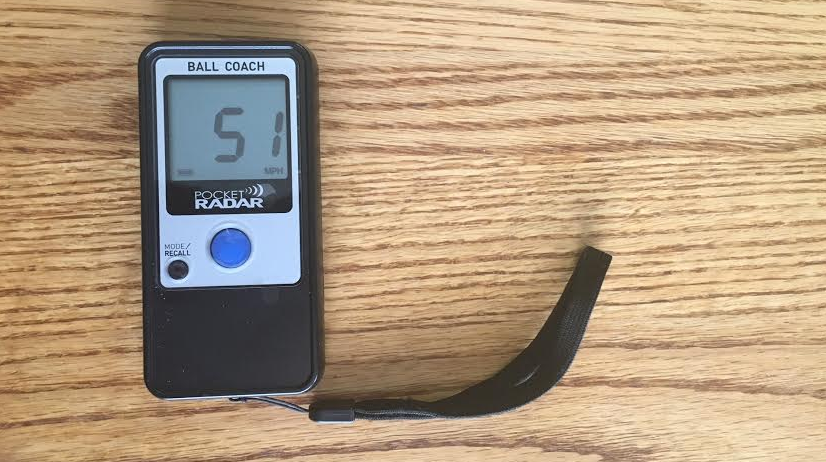 Let’s put this simply. Since buying baseball and softball gadgetry during the last 10 years NOTHING has been more useful, fun and worth it than our Pocket Radar Ball Radar. There, we said it.

And after 2 years of use…

The Pocket Radar Ball Coach on our hip and the Stalker Sports 2 gun has filled nearly every need we had. We even SOLD our Stalker Gun.

For the majority of coaches, parents and players, this little gadget will serve their need for a radar gun. It consistently makes our baseball gift guide for a reason.

Where to Buy the Pocket Radar

We got ours on Amazon. Of course you can check Pocket Radar website too. But, for the most part, the prices were the same. And our Prime shipping and familiarity with the retail giant made us go that way. 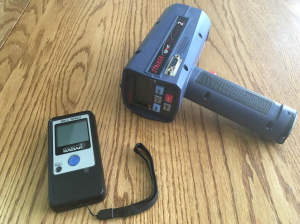 There are at least three features we appreciate from the Ball Coach Pocket Radar Gun.

If you’ve lugged around something like the Stalker Sports radar gun, the size of the Pocket Radar is fantastic. It fits easily into the belt holster case included with the device. The radar weighs only a few ounces. It is so light, in fact, we wondered if it would work at all. It can easily be carried to and from any sports park in the country without much notice.

This is the complete opposite experience of dealing with any standard sized radar gun.

Accuracy is Spot On

It’s accurate. When you stand directly in line with the ball flight it works just like the Stalker 2 we have.

This means, if you have access directly behind the net or back stop, then you’ll get accurate readings. Expect to be at least as accurate as the Stalker Sports 2 Gun.

You can also get accurate readings by standing behind the thrower. We found these readings to be accurate up to at least 100 feet behind the ball flight.

We have had the same set of batteries inside our Pocket Radar for over a year. We keep thinking it is going to need some soon, but it never does. 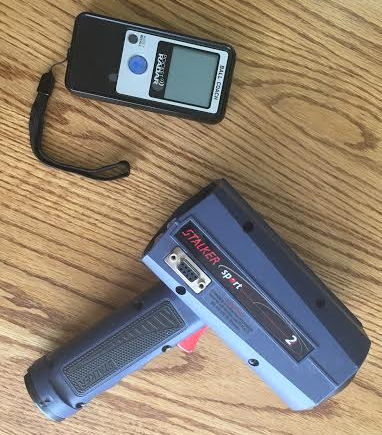 We have owned a Stalker Sports 2 gun for nearly three years now and no longer take it to many practices and games simply because it is so bulky to carry around. As a coach and parent whose hands are always full to and from the field, the Pocket Radar is the perfect size. It seriously fits in your pocket or with the case, clips on to your pants easily.

During our robust testing, there were four deficiencies in the Pocket Radar. Some of which could be deal breakers, though probably not for the average buyer looking at the device.

It Does Not Work at Angles

The Pocket Radar, unlike the Stalker Sports 2 Gun we used, does not work at angles. If your location is more than a few feet to the left or right of the direct ball path then it’s likely you’ll get lower speed readings. Mind you, you’ll still get reading, just lower readings than what is actually happening.

Other more robust radar guns can be used at angles, but you must set your given angle to the ball flight in the settings.

If, for example, you are sitting in the dugout at a 15 degree angle on the line between the mound and plate, then the Stalker Sports gun could give you accurate absolute numbers as to the speed by simply changing the settings. If all you have is a Pocket Radar, then your readings will be lower than what is actually happening in absolute terms. However, it should be noted, in relative terms the Pocket Radar is accurate by way of comparison to other pitches from that same angle—but you can expect your number to be less than the absolute, or actual, speed. In other words, the claim the Pocket Radar is useless at angles isn’t accurate. It may not be able to give you an exact speed, but it can tell you if a pitcher has lost steam or how his speed compares to the next guy.

Second, the Pocket Radar doesn’t work at considerable distances. The Stalker Sports gun is rated up to a few hundred feet—which may be helpful if you’re in the stands or are scouting a player from distance. With our Stalker Sports gun we’ve even received some readings from dead center outfield over a pitcher’s shoulder to home plate. Any attempt with the Pocket Radar at these distances wouldn’t work at all as it isn’t rated to go much more than 100 feet from the ball path.

VERY short Distances it struggles too

The Stalker Sports 2, on the other hand, picked it up with a pretty good amount of accuracy—although it wasn’t perfect either.

The Stalker Sports 2, as well as other classic styled radar guns, come with ports to output speed to a display. You cannot use the Pocket Radar for this purpose as there would be no way to port the data.

Simply put, if you are a scout or a coach who needs to track speeds at considerable distances under a number of different circumstances (hitting, pitching, base running, etc.) then the Pocket Radar will NOT be for you. Radar guns like the Stalker Sports or Juggs Gun may be for you. Those guns are robust with several options and accuracy you can count on.

If, on the other hand, you are a coach, player or parent who has access to an angle in the direct path of the ball during a game or practice—within about 100 feet—then the Pocket Radar is a no brainier. It’s less expensive and less bulky. It will be a useful for you not only because you’ll be in a position to record speeds, but also because you won’t leave it in the truck deciding it’s too cumbersome to deal with.

For the right person, the Pocket Radar will be the best toy they ever bought.