If you are serious about your catcher’s gear then it is likely, indeed recommended, you put Marucci’s catcher gear equipment set on your short list. We spent a few hours behind the plate using the gear, side by side with a number of other sets, and are confident anyone in the space would be perfectly happy with Marucci’s gear for its good flexibility, well designed helmet, expandable padding and the use of memory foam.

(The best pricing we found was at this link on baseballexpress. Our Amazon searches couldn’t find the full set but they may be added here later). 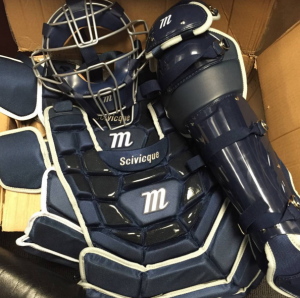 The Marucci catcher’s gear helmet and mask was our favorites of the bunch we tested. We liked the high viability the mask gave—much like a hockey goalie’s helmet design—as well as the memory foam within the mask that gave it a comfortable fit. The three catcher’s we had use the mask commented on its light weight design and padding on the back plate. We also suspect moms will appreciate the removable padding within the helmet for easy and effective cleaning. 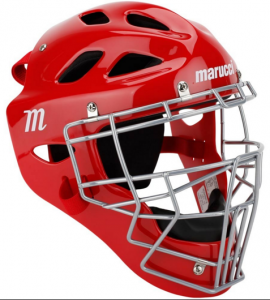 The most unique thing in the Marucci catcher’s chest protector is the high silicone gloss on the chest portion of the protector. In theory, although it was very difficult for us to measure this, the high silicone (which felt like a sticker substance) would stop spinning balls from ricocheting far away on a blocked ball. If impossible for us to measure the principle of the idea at least made sense.

Otherwise, the chest protector has a real good fit to it with multiple points of adjust-ability, a high neck for some added protection and shoulder caps that could be moved or taken off to customize your set up. There felt like a great deal of durability in the straps and design. [/ezcol_1half_end]

Compared to the other models we tested (Easton, Rawlings, Louisville Slugger, Boombah) we found the inner leg protection on the Marucci leg guard the most unique feature of all the leg guards. For whatever reason, other brands in the catcher’s gear space don’t worry too much about the inner half of the leg with their leg guards. Marucci’s set covers nearly 2 inches deeper than any other product. If that actually makes the gear better would be a question of preference, but we can say with confidence the leg guards on the Marucci Mark 1 set produce more covering on the inside half of the leg than any other brand.[/ezcol_1half_end]

Unlike bats, we struggle to truly differentiate between the performance space catcher equipment sets on the market. Marucci’s gear is clearly on the top shelf with some others in the class. It is a well made and well thought out set of catcher’s gear made for maximum protection, comfort and flexibility. There is also a serious consideration for temperature control with a lightweight material meant to wick away sweat both in the helmet and on the chest. The silicone chest coating to stop balls from spinning and the added protection on the inner half of the legs could be enough to push some buyers towards these sets. We are not convinced the set is significantly different enough than others to suggest it’s a mistake to go in another direction, but going with Marucci’s catcher’s equipment set is clearly as a good a choice as you can make.

Colorwise we wouldn’t hate to see some added options with, potentially, some green and yellow or maybe a few three tone looks.

Marucci controls the price on the sets rather well and we did not find a serious discount on the set. Amazon didn’t carry the set as a whole. Baseball express, one of our favorite places to shop, does have all three items that you’ll need to add to your cart. Of course you can always buy direct on Marucci’s site too. If you find better pricing out there don’t hesitate to let us know.