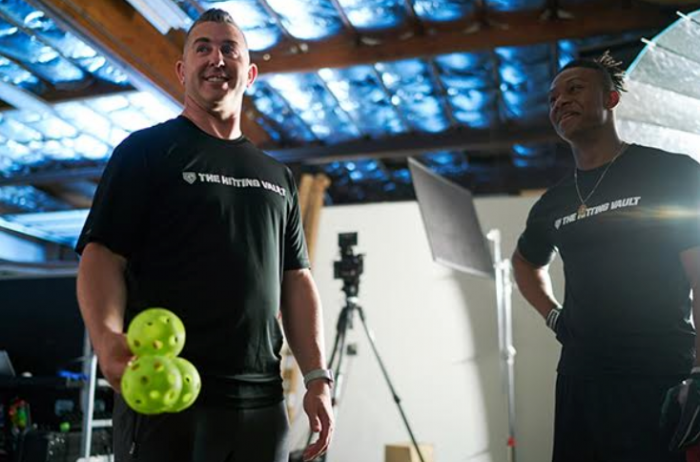 Hitting Vault Review | Drills, Videos, Is Lisle Worth It?

We spend several hours each week behind the Hitting Vault’s paywall, and over the course of that time, have watched nearly every one of their videos. Two of our sons are in the process of their SwingBuild program as we write this. As well, we’ve spent a considerable amount of time speaking to folks who work there and exchanging emails with Coach Lisle. Armed with that information, we set out to write this independent Hitting Vault review. We do not see the Hitting Vault so much as an interactive instruction booklet used to improve a particular swing. Rather, the Hitting Vault is the Bible of swing mechanics…It is authoritative, built on decades of experience, and when applied with patience, will improve any player’s swing.

We first heard the phrase, “$400 bat and a $4 swing” from Coach Lisle. (Coach Lisle, you may know, is the feature instructor at the Hitting Vault). The idea behind the phrase is that an expensive bat will not fix a terrible swing.

As a site that reviews bats, we actually agree with that sentiment. We notice that many parents are prone to spend considerable amounts of money on a high end bat, yet don’t appear to be as convinced they need to spend money helping their player swing it correctly. And the assumption that any old travel ball coach knows what he is talking about is wishful thinking—even if he did once play college ball.

As we have said elsewhere, we would take a great swing and cheap bat over a terrible swing and a great bat. Of course the best combination is both a great swing and a great bat. Even the best archer shoots the best arrow. So, if you find yourself hesitating on getting some great hitting instruction, but willing to pull the trigger on a $250+ bat, we suggest you consider paying less for the bat and invest in top end hitting instruction. We do not see the Hitting Vault so much as an interactive instruction booklet used to improve a particular swing. Rather, the Hitting Vault is the Bible of swing mechanics broken down to a granular level. In some measure, think of it as a master class directed by an industry recognized hitting guru. You dive into the material and practice self implementation. Taken step by step, we have no doubt any player, from t-ball to pro, will improve their swing.

But, we should note, the timeline by which you implement the skills discussed is not outlined for you. Things like reps, practice cards, and coach assessments for any particular skill are not offered by the site. (We are not sure how they even could be). Implementing the mechanics detailed behind the paywall will be entirely self-directed. As such, we recommend you do this with a parent, coach or teammate. Of all the categories of folks we think the Hitting Vault will serve well, coaches are on the top of that list. If you coach a competitive team in softball or baseball and are looking for some authoritative advice on building the best swing for your players, then the Hitting Vault is the exact source of information for you.

We don’t want to sound too much like cheerleaders here, but the moment we understood the exhaustive nature of the Hitting Vault and the structure meant more for reference than as a schedule, we decided every one of our son’s and daughter’s coaches should be students of Coach Lisle’s Hitting Vault.

Apparently the Hitting Vault has also rolled out a fitness program called Swingfit. Will be interesting to see what type of feedback the industry gathers from that.

Parents highly involved in their son’s or daughter’s baseball and softball adventures should consider this service. But, to take full advantage, you’ll need confidence in your ability to assess, or your player’s ability to self assess, the implement of the instruction.

Considering you likely spend hundreds and hundreds, if not thousands and thousands, of dollars on your family’s habit of competitive baseball/softball, what is another $200? We say that slightly tongue in cheek of course, but there is some wisdom in optimizing the use of that fantastic bat you just recently dropped $350 on, right?

It is possible, in fact likely, your coach is a volunteer. And, as such, it is also probable they don’t know nearly as much about hitting as they like to put on. Bless their hearts.

Access to the Hitting Vault gives you direct access to a pro level hitting coach. You can take what he is saying as the gospel truth. No matter where you are on the hitting spectrum, we are confident you’ll find some usefulness in the instruction behind the paywall. But, as we mention above, do know your ability to implement and practice the skills discussed will be entirely up to you. We’d suggest you find a teammate or parent who is as committed to you hitting dingers as you are.