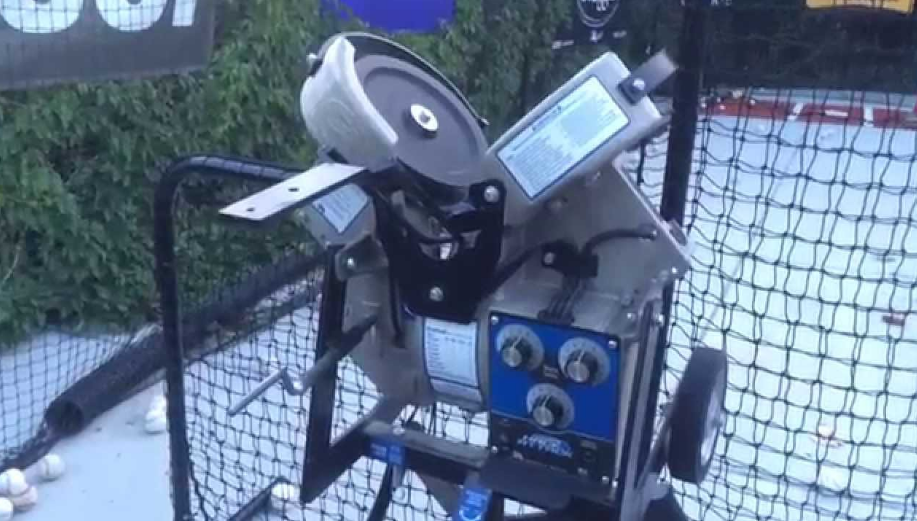 The best pitching machines have three independent wheels. This allows for all types of pitches. You can save money by buying a machine with less power. As long as the device can reach 60mph, you can adjust the distance to recreate game speed timing for almost any situation.

Recommended Videos For You… 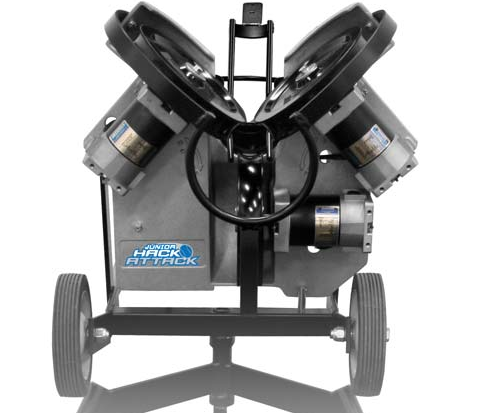 The Junior Hack Attack tics all the boxes for us. It is highly durable, has three independent wheels to create all pitch types, has an optional ball feeder adapter, and doesn't cost a fortune (although still not cheap). The junior version can get up to 75mph and, for most purposes, works perfectly. Even if you want to practice faster timing you simply move the machine closer. As well, it's much smaller than other full-size three-wheel machines and can transport easily enough. It fits in most full-size trunks. 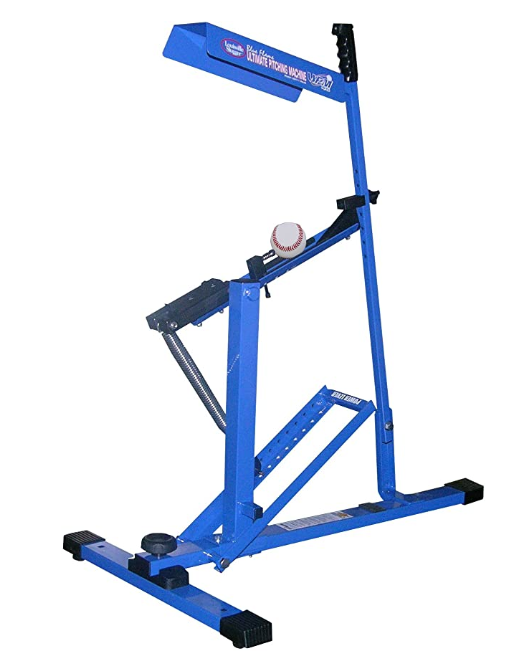 These are usually priced under $200.

Don't overthink machine work. This kickstand design gives you many options, portability, and a repeatable pitch from up to 60 feet. (And maybe more if you were practiced). It's not like other machines don't require you to stand there and feed baseballs anyways. Use this kickstand style load to throw strikes over and over.

These things are durable and easily portable, and you won't run around looking for a plug or have significant repair costs if a motor breaks.

These are usually priced under $200.

Best Pitching Machine Where Money and Space Do Not Matter 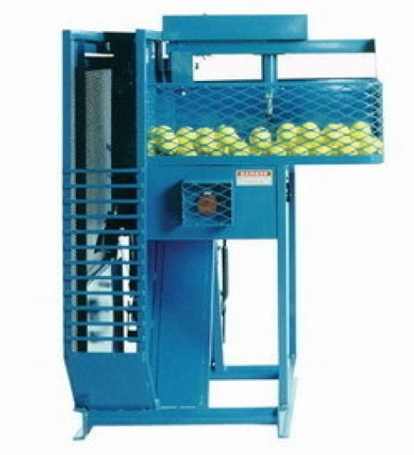 There are a few different Iron Mike machines and, if you’re serious bout it, worth looking on their site about the differences. We have an MP-4 but the MP-6 is great too.

If money or space is no object, and portability is not a request, then you can't beat the MP-6 from Iron Mike. MP stands for Master Pitch, and these folks have been around for ages. The machines they make, that are overhand throw machines, are the stables of the machine pitch world, can hold hundreds and hundreds of balls, and last years and years. Maintenance on the machines is needed, but parts are reasonable, and service is great. A most appreciated feature of the Mike Arm is that it throws over hand. However, they are anything but cheap and have the portability of a large boulder. If you have the space, budget, and need then we highly recommend it.

There are a few different Iron Mike machines and, if you’re serious bout it, worth looking on their site about the differences. We have an MP-4 but the MP-6 is great too.

However, in terms of the backyard cage, high school, or college coach looking to get the most bang for his buck on a batting machine, then we are confident our choice is the best one on the market. The reasons for that are to follow.

There are three reasons we think our advice on pitching machines is legitimate. For starters, we don’t sell pitching machines. We are not biased by the inventory in our garage, hoping someone may end up pulling the trigger. Second, we have experience with several pitching machines over several years. We have used them all from ATEC to Jugs and from Rawlings to Iron Mike.

Compared to other three-wheel machines, the Junior Hack Attack is nearly a steal. Granted, after spending $2,000, most walk around as they’ve just been robbed. But, in comparison to the market, they compete directly against it, it is the best price.

When we bought ours years ago, you could only purchase the machine directly on their website. We called them, spoke to a real person, and then sent them our money. Today, you can buy this thing on Amazon with PRIME shipping for as cheap as they are on their site.

Occasionally, they do have a deal or two, so it is worth checking their website. You may also benefit from calling the group directly and telling them you read the review on justbatreviews.com. Not that that will give you any discounts, but it might not hurt!

Why the Junior Hack Attack? 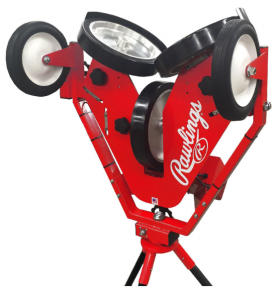 If you need something that throws 90+, then check ATECs M3 or Rawlings’ Pro-Line Three Wheel. If you want a single-wheel machine that unrealistically pitches dimpled yellow balls, then Jugs’ Changeup or MVP is the favorite.

Pneumatic devices still have a long way to go. The barrel these balls are shot out from makes the hitting experience much less realistic than we would hope. But, in today’s market, Zooka is the market leader.

Features You Should Care About

Let us put the most apparent feature aside for the moment. That is, let us forget for a second about the price. We will come back to that. First, let us build, virtually, our favorite pitching machine. After much thinking and theorizing, most will come to three conclusions about a pitching machine they would like to own.

The Best Pitching Machines Have at Least Three Wheels

The best pitching machine will not only pitch real leather baseballs but treat them well enough to last a season or two. One way to accomplish this is more pressure points on the actual pitch. Single and double-wheel machines work by pinching the balls out at excessive spin rates. Our experience is a machine with less than three wheels is much more likely to eat balls up. As such, the best pitching machines have at least three wheels.

Not only is ball durability a severe factor in the number of wheels your pitching machine uses, but it also dramatically affects the ability to throw different types of pitches. Three-wheel machines give you liberty for curves, sliders, knuckles, accurate sliders, and pitch movements.

Some two-wheel machines throw curveballs. But, the adjustment from left to right-handed throws and other off-speed looks are difficult and time-consuming to hone in. Three-wheel machines, where each wheel is independently measured and controlled, make changing pitch types quite simple. In fact, after a few solid hours of use, you’ll find yourself capable of painting corners with a back door slider and dropping a deuce on the plate that starts on the hitter’s hip.

Single wheel machines offer no ability to throw anything but straight balls with an unrealistic backspin. For the same reason, they also struggle to reach decent pitch speeds.

The Best Pitching Machine is Portable

All things are portable if you are strong enough and have a big enough flatbed. But the best pitching machines for the money would be reasonably easy to move. Taking it from the indoor cage to the practice field and back to your backyard, the batting cage is a feature you’ll wish you had if you don’t.

Portability is where many three-wheel machines fall short. They tend to be bulky and much less portable when compared to some single-wheel machines or even pneumatic options. Our pick for the best pitching machine for the money is built with two wheels on the front end that make it, surprisingly, simple to move. If you are weak, don’t expect to get it into your truck bed. But a neighbor or player’s help can get that job done in a matter of seconds.

The Best Pitching Machine: Let’s be Real about Speed

At 50 feet, a 70 mph fastball creates the same reaction time as a 90-mile-an-hour fastball. Move it up to 45 feet, and you’re now talking about a 100 mph heater. We would expect our best pitching machine to be able to throw severe gas, but it is unlikely we would need it to throw an actual 100 mph. If we want to see a faster pitch, move the machine closer.

Some require an authentic 90+ mph look, but the costs of getting top-end speed never appear worth it. Depending on the make and model, moving from 70mph, max speeds up to 90mph is often a 50% price increase.

The Best Pitching Machines Can Be Used For Fielding Practice Too

Some machines are so rigid or incapable of changing spin rates that using them in the field for a consistent ground ball or fly ball practice is nearly useless. If they are not too bulky to adjust quickly, three-wheel machines can create the correct type of spin on hit balls. Want to throw a tailing right-field drive by a left-handed hitter? Done. A top spinning ding to third? Easy. An MLB-sized pop fly? You got it.

What Makes a Pitching Machine Best

You can save money by buying machines with less power. We like, for example, the Junior Hack Attack. It maxes out at 75mph (we’ve radar gunned it). But, you can always move the machine closer to a backyard ball or full-size fields. Smaller motors will be considerable cost savings.

In terms of priority as you look for your machine, we’d choose:

After those factors and a ton of testing, we think the Junior Hack Attack from Hack Attack sports is the best pitching machine for the money.

Coaches like the Hack Attack’s durability, three-wheel motion for ball control and consistency, and reasonable price point. The machine’s ability to use all baseballs and softballs is a big plus.