Is it even possible to review throw-down bases? Uh, you throw them down on the ground and then play. They exist! Indeed, it’s far-fetched to think we found something extraordinarily unique. But we try nonetheless.

Throw Down Base construction 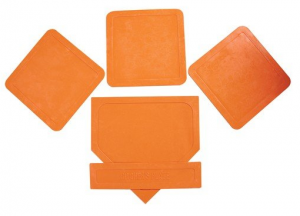 The BSN bases are thin, heavy, and durable. This keeps them out of the wind, pinned to the ground, and a part of your baseball and softball arsenal for years and years to come. They are made of rubber and, as such, easily transportable and can fit in just about any place you can shove them.

It comes in 5 pieces, as the pictures make it pretty clear. Pitch rubber, home plate, and three bases come in a four-pound box. [/ezcol_1half] [ezcol_1half_end]

Throw Down Base Uses

These bases will work indoors in a gym, stick nicely to a floor, or keep their relative position outside in the grass. They will work for a portable tee-ball field and an impromptu Wiffle ball field and serve as practice bases for any level of softball, fastpitch, or baseball.

Throw Down Base Popularity

Of note, these orange BSN throw-down bases are the best-selling item on Amazon in the baseball and softball categories. No surprise there. They’re cheap, easy to port around and have a million different uses for the pickup game or the more organized gig.

We usually reserve these pages for performance bats, with an occasional exception. (See this best fastpitch bat article, for example). We’ve reviewed bags, gloves, and a handful of smaller items. But we’ve never quite come around to reviewing something so straightforward. But, due to their popularity, we thought there was some value in having a landing page.

Throw Down Base Recommendation

If you are looking for a set of throw-down bases, we couldn’t see anyone going wrong with these orange BSN bases. They are cheap, easy to spot, and heavy enough to stay in the same place. We’d recommend these BSN orange bases to just about anyone.